Ben (Greg Timmermans) is a mentally disabled young man being ruthlessly bullied at school. His divorced Mother (Marijke Pinoy) is running out of options and has Ben’s younger brother, Jonas (Cesar De Sutter) to think about. His Father (Gilles De Schrijver) has a new girlfriend, Sabine (Tania Van der Sanden) who doesn’t care for the family dynamic of sheltering and coddling Ben.

Ben has his online role-playing games to escape into. Upon a public humiliation from his school bullies, Desmet (Maarten Claeyssens) and Bogaert (Titus De Voogdt) Ben loses it and contimplates suicide more deeply. Ben’s saving grace is Scarlite (Laura Verlinden) a fellow player in the online game. Ben and Scarlite have a nice Saturday morning out.

Scarlite and Ben gets his parent’s help to commit suicide via falling off a boat. During Ben’s memorial they show the public humiliation video from the audience’s point of view. During this time Scarlite encourages Ben to come out of hiding and show that he’s not dead. His Mother states that no one would help for some boy being bullied so someone had to die. His Father states that some people would say it’s wrong but some would say that it had to be done that’s why they did it.

It ends with Ben, Jonas and their Mother in a field with a horse and Scarlite. Ben is opening up to feeling something so that he can feel good. Ben is speaking to Scarlite but his Mother and others don’t see anyone there. 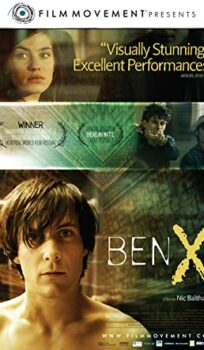