Brent (James Fransiscus) and Nova (Linda Harrison) are captured by the radiation-scarred mutants and reunited with Taylor (Charlton Heston). Just as the three humans get the upper hand on their captors and attempt to escape, the gorilla invasion begins, and Nova is killed. Driven into a rage, Taylor leads Brent on an attack on the gorillas. 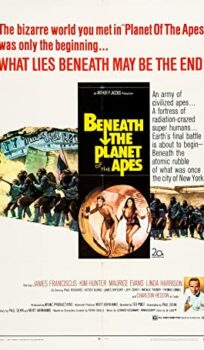