Beowulf (Ray Winstone) kills Grendel (Crispin Glover). He later confronts Grendel’s mother (Angelina Jolie), but instead of killing her, he impregnates her and then lies to everyone that he killed her. King Hrothgar (Anthony Hopkins) knows the truth, as he is Grendel’s father.

Many years later, an aged Beowulf is presented with the treasured horn he swore he’d leave with Grendel’s mother to prevent further confrontation. Shortly after, a dragon terrorizes Beowulf’s kingdom. Beowulf and his right-hand man Wiglaf (Brendan Gleeson) approach the cave of Grendel’s mother. Beowulf tells Wiglaf that, in the event of his death, Wiglaf shall be king. Beowulf enters the cave to be confronted by Grendel’s mother, who immediately sicks the dragon on him. After a long attack by the dragon, resulting in the destruction of most of the castle, Beowulf puts himself in position to stab the dragon’s heart. However, his sword cannot reach, even after he cuts off his other arm and is held in place only by his mesh armor. After he drops his sword, Beowulf reaches into the dragon’s chest and rips its heart out. The dragon and Beowulf fall to the beach below.

While the dragon’s remains are being washed away, its true form is seen, that of a golden man who can only be the offspring of Beowulf and Grendel’s mother. After the son is finally washed away to sea, Wiglaf attends to his king. Beowulf attempts to tell Wiglaf that he lied about killing Grendel’s mother, but Wiglaf does not believe him, and Beowulf dies. To honor him, Beowulf’s body is laid to rest on a small ship loaded with all the treasures of his land, as they are meaningless to his people. The ship sets sail and is soon set on fire so that Beowulf would be laid to rest with all that he had earned.

As the people are beginning to move on, newly crowned king Wiglaf catches a glimpse of Grendel’s mother kissing Beowulf’s dead lips, just as the golden horn washes up on the sand. After picking it up, Wiglaf looks up to see Grendel’s mother emerging from the sea, enticing him to join her. Wiglaf steps into the water, clutching the horn in his hand, and the two look each other in the eye. 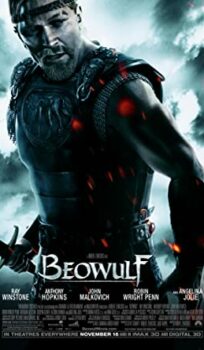