Maxwell Dent and Karla Fry (Jurgen Prochnow and Brigittie Nielsen) are the ones behind the Alphabet crimes. They were doing the crimes as a cover-up to a burglary plot. The burglaries were to make enough money to pay…

Nikos Thermopolis (Paul Guilfoyle) – The top gunrunner on the west coast. He was selling Dent guns which Dent intended to take with him to Costa Rica (after all his American businesses went bankrupt and he could collect the insurance on his racetrack, the final robbery).

Last but not least is Charles Cain, Dent and Fry’s patsy, who introduced them to Thermopolis and helped them get everything moving, not knowing that they would turn on him and kill him, making the police believe that Cain was the alphabet bandit the whole time, killed by a security guard (who we never find out if he was in on it or not).

BUT the case is solved by Axel Foley and his boys Rosewood and Taggart. They follow Dent, Fry, and their henchmen to Dent’s oil field, where Dent and Fry are killed, and their men surrender.

Thanks Herbmeistr with an addition by Tornado Dragon 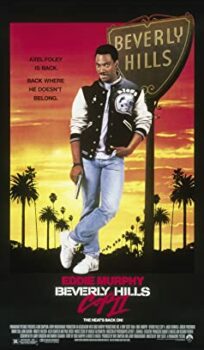