Haru (Chris Farley), while out looking for Sally Jones (Nicollete Sheridan) in Beverly Hills, finds the mansion she is staying at with counterfeiter Martin Tanley (Nathaniel Parker) and learns her name is actually Allison Page. He confronts her about it, and she says that she had to use the false name so Tanley wouldn’t know she hired him. She became involved with Tanley because her sister was with him for 3 months before she died under mysterious circumstances, and she believed Tanley had murdered her. She wanted to bust him and his counterfeiting operation and send him to jail for her sister’s death. Haru decides to continue to aid her in busting Tanley. During the latter stages of the mission, Tanley figures out Allison is plotting against him, and so he captures her, brings her to his warehouse, ties her up, and locks her in a room with a bomb.

Haru makes it to Tanley’s warehouse, where Gobei (Robin Shou) who had been secretly aiding Haru through his entire mission and also bore the painful end of nearly all of Haru’s errors finally shows himself to Haru and helps him fight off Tanley’s goons, and Haru finally shows off some great ninja skills for once even though he would accidentally knock out Gobei while trying to stop Tanley. Haru’s apprentice Joey (Chris Rock) also proves himself useful by taking out one of Tanley’s goons in a surprise attack, though he knocks himself out while doing so. Haru saves Allison by shooting a huge harpoon through the wall of the room she’s in, which goes out the other side and onto a truck that Tanley commandeers to make a getaway. The rope then reels the harpoon launcher in, crashing through the wall and also going out the other side, but taking the bomb with it and landing on the truck. The bomb explodes, though it doesn’t kill Tanley. Allison calls Haru the greatest ninja of all time, and when the cops come, Tanley and his goons are taken away in handcuffs.

Back at the dojo, Haru, with Allison on his arm, tells Sensei (Soon-Tek Oh) that he was leaving the dojo to go live in Beverly Hills so he could be with Allison and because he felt he would be more useful in a place where there weren’t so many ninjas. An injured and wheelchair-bound Gobei tells Haru he’ll fight on his side anytime, and he gives Haru his medallion. As Haru and Allison take off on the bus, Gobei doesn’t notice until it is too late that Haru’s grappling hook, stuck in the door of the bus, is attached to one of the wheels of his wheelchair, and so he is dragged along with the bus. Gobei curses Haru until the bus reaches a cliffside, and Gobei hits some big rocks and is sent flying into the sea. Haru yells out to Gobei that he’s sorry before he goes out of range. 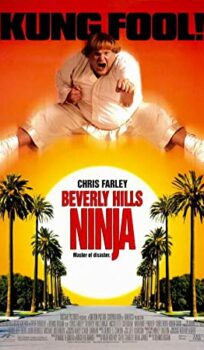