Beyond a Reasonable Doubt(2009)

SHORT VERSION:
C.J.’s plan fails, and he is convicted and sentenced to death.  Ella’s investigation proves DA Hunter was planting evidence and has C.J. released from prison.  However, she later learns that C.J. did indeed kill the prostitute because she was blackmailing him.  C.J.’s plan all along was to get rid of the blackmailer and expose Hunter at the same time.  The movie ends with C.J. arrested again for the murder.

LONG VERSION
C.J. Nicholas (Jesse Metcalfe) is a television reporter who is investigating DA Mark Hunter (Michael Douglas), who he believes is planting DNA evidence in order to secure convictions.  With the help of his friend and fellow reporter Cory, C.J. will set himself up as the prime suspect of a murder, and will document how the only way Hunter can get the conviction is to use evidence that C.J. and Cory are planting.  Nobody else knows that they are doing this, including C.J.’s girlfriend Ella (Amber Tamblyn), who works with Hunter as an ADA.  While this is going on, C.J. is constantly getting harassing calls from an unknown woman.

One night, Cory tells C.J. of a murder that would be perfect for the the set-up.  A prostitute was murdered, and there is only circumstantial evidence.  After learning the details from Detective Nickerson (Orlando Jones), C.J. and Cory begin planting evidence that will lead to C.J. as the killer.  Cory videotapes everything that will prove that the evidence was planted and C.J. is innocent.  The plan works, and the police arrest C.J. for the murder.  At C.J.’s trial, the case is going badly for Hunter, and DNA evidence suddenly appears.  This is the cue for Cory to retrieve the video and present it to the judge.  However, Hunter’s friend in the police, Detective Merchant, has already figured out that C.J. and Cory are planting the evidence and will expose Hunter’s scheme to frame C.J. and cause all of his previous convictions to be thrown out.  Detective Merchant follows Cory to where the video was hidden, and the resulting chase causes Cory to be killed in an automobile accident, and the video is destroyed.  With no proof that the evidence was planted, coupled with the fake DNA evidence, C.J. is convicted of the murder and is sentenced to death.

Ella, the only one who believes C.J.’s story, begins to investigate Hunter herself.  She looks at a photo from an earlier case that Hunter won, which shows a cigarette butt next to a murder victim.  This is the photo that C.J. saw that caused him to begin his investigation of Hunter in the first place.  C.J. believes that the cigarette butt was digitally added to the photo, and Ella’s investigation of the photo proves him right.  But before she can take the evidence of her investigation to Detective Nickerson, Ella is chased by Detective Merchant.  He has her trapped and tries to kill her, but he is killed by Nickerson, who was following him as part of another investigation.  With Ella’s evidence, Nickerson has Hunter arrested and all of his cases are declared mistrials, including C.J.’s.  The judge then orders C.J. released from prison.

That night, Ella is watching the news of C.J.’s release when they show a picture of the murdered prostitute.  Ella notices that she had tattoos of stars on her fingers, and realizes that she’s seen them before.  As part of her investigation, she watched a news report that C.J. had made previously about a woman named Taieesha.  This news report won an award, and gave C.J. a career boost.  Ella figures out that Taieesha, who had tattoos of stars on her fingers, and the murdered prostitute were the same person, and that the harassing calls stopped after the murder.  Ella determines that the news report was fake, and that Taieesha was the one calling C.J., trying to blackmail him from revealing that the report was fake.  Doing so would have destroyed his career.  The only way to stop her was to kill her, and it was her murder that he would use to get Hunter.  After confronting C.J., who admitted he did kill her, Ella told him the plan was nearly perfect.  You would get rid of a blackmailer, and expose Hunter for planting DNA evidence at the same time.  In addition, due to his acquittal in the murder case, he couldn’t be re-tried to due double jeopardy.  However, the case was a mistrial, and double jeopardy doesn’t apply.

The movie ends with C.J. arrested again for the murder. 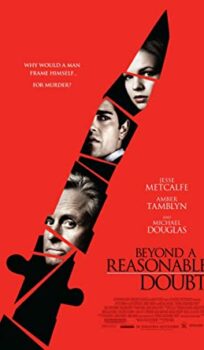