Pooper:
After being rejected by Lance, Z Man kills Lance, Otto, Roxanne, and Casey in a drug-induced rage. Casey’s bandmates arrive too late to save them. During the struggle between Z Man and the band, Z Man is killed and Harris is knocked over and regains his ability to walk. The film ends with Harris marrying Kelly, Emerson marrying Pet, and Susan marrying Baxter.

Long Ending:
Written by Roger Ebert, the film opens on a gorgeous and talented all-girl rock band featuring Pet (Marcia McBroom) on the drums, Casey (Cynthia Myers) on guitar and Kelly (Dolly Read) as the singer. They are managed by Kelly’s boyfriend Harris (David Gurian). After a show, Kelly convinces Harris to take them to LA where she has a wealthy aunt named Susan. Kelly meets Susan, a famed artist and photographer, who agrees to give Kelly a big chunk of her inheritance and introduce the band to her friends. Susan’s attorney Porter takes an immediate disliking to Kelly and constantly disparages her (including the line made famous by the Sublime song “Smoke Two Joints,” where he says “they were smoking marijuana cigarettes…. reefer!”).

Susan introduces the band to Z-Man (John Lazar), a wealthy music producer who agrees to sign them. The band rockets to success, and Kelly becomes enraptured by the fame and parties. She soon ditches Harris to date a hedonistic gigolo named Lance (Michael Blodgett). Pet also enjoys herself and eventually begins dating a law student named Emerson. The others go in to a tailspin. Harris succumbs to the advances of a porn star named Ashley and becomes an alcoholic, while Casey retreats to a life of solitude and drugs. With Lance’s help, Kelly exposes Porter’s attempts to get her out of Susan’s life and he is fired.

Things begin taking a turn for the worse:

Although Harris eventually recovers, he is rendered paraplegic and confined to a wheelchair. Nonetheless, he and Kelly reunite. Roxanne and Casey start a romantic relationship. Pet also manages to patch things up with Emerson and she uses a knife to chase away the man she cheated with when he again attacks Emerson.

Z Man then invites Lance, Casey, and Roxanne to a drug ceremony where they dress up as superheroes (Roxanne as Catwoman, Casey as Robin, Lance as “Jungle Boy” in leopard print briefs, Z-Man as the fake superhero “Super Woman,” and Z Man’s butler Otto in a Nazi costume). During the drug ceremony, Z Man’s advances are rejected by Lance (although it appears Z Man had sex with Lance while he was passed out). Z Man reveals that he is actually a woman (i.e., he is a a transgender man) and is mocked by Lance. This causes Z Man to go into a rage where he decapitates Lance, stabs Otto to death, and shoots Roxanne in the head. Casey calls her friends and Emerson, Kelly, Pet, and Harris (in his wheelchair) race off to save her. They are too late as Z Man finds and kills Casey before they arrive.

The foursome struggle with Z Man and he is fatally shot in the struggle. During the confrontation, Harris is knocked out of his wheelchair and somehow regains the ability to walk (the movie also suggests that Casey’s death balanced out the metaphysical scales to allow Harris to walk). The movie then narrates how all of the characters were flawed (including Susan for being “too good of a person”) and that everyone must overcome their flaws to become truly happy.

In an epilogue, there is a triple wedding with Kelly marrying Harris, Pet marrying Emerson, and Susan marrying a long lost love named Baxter. Just before the wedding concludes, they notice Porter watching them from the bushes, unable to give up his obsession with them. 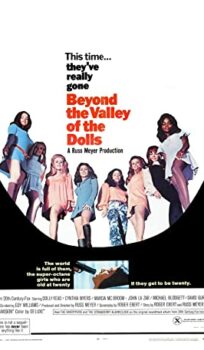