One night, David (Rick Moranis) meets with Ross (Tom Arnold) at the playground outside the school and confronts him over his bullying behavior towards him. Ross calls him a scared little kid in an adult’s body and questions him on when he has ever stood up for himself, and David decides to inform him that he was the one who turned him in to the authorities when he stole the Moon rock years ago (which subsequently ruined Ross’ life). Enraged, Ross chases him into the school and they have a cat-and-mouse game inside it, and Ross loudly enlightens him to the horrors he endured at the hellacious reform school he got sent to.

Eventually, David escapes through the roof and runs into the forest to his old hideout in a cave in Vermillion Falls, but Ross follows him there. After going through the caves and getting back outside, he starts crossing a bunch of downed logs positioned just above the waterfall and finds his old Evel Knievel action figure that Ross had ripped the head off of when they were kids. This inspires him to pick up a piece of wood and stand his ground just as Ross shows up. He tells Ross that he is through with running from him, and when Ross says that he once considered him a friend, he replies that friends don’t beat up and humiliate each other. Ross attacks him, and he hits Ross with the wood, causing him to lose his footing and fall while hanging onto a branch. The branch then snaps, and Ross plummets into the plunge pool and disappears.

Thinking that he killed Ross, David returns to town and goes to the police station to make a full confession, but discovers that all of the cops have stepped out for a while. His friend Ulf (Tony Pierce) then appears in his fire truck, and he tells Ulf about what he believes he did. Ulf takes him home and promises to head out to Vermillion Falls to find Ross’ body, urging him to lay low in the meantime and adding that he will get rid of the evidence. After having a chat with his neighbor Art (Jeffrey Tambor), who has figured out that he killed Ross because everyone in town knew of their feud, David goes inside to find Ross’ son Kirby (Cody McMains) hanging out with his son Ben (Blake Bashoff), but he says nothing to them about what happened.

As David is sleeping in his bedroom, Ross suddenly shows up alive and well, and he wakes David up and resumes fighting him. In the midst of it, Ben and Kirby come into the room, and Kirby tells them that he and Ben made up and wonders if they could do the same. After they go, David asks Ross why he stole the Moon rock, and Ross admits that he did it because he wanted to be an astronaut when he was a boy, and he calls himself a failure. David reminds him that he isn’t a failure because he raised a great kid like Kirby, and also points out that the tip of his “fang” has been chipped off.

When the school semester ends, David – feeling like he has closed a chapter in his life by facing Ross again – decides to move to New York. As Victoria (Julianne Phillips) is helping him pack, she finds the copy of Green Eggs and Ham that David borrowed from the school library when he was younger but never returned. He asks her to return it for him and promises to reimburse her for the late charges, but she says that he can pay her back when she comes to New York, and they kiss. Ross then appears and give David a new(er) Evel Knievel doll as a going-away present, and David tells him to look up him and Ben if he is ever in New York.

As David and Ben leave town, we see Ross and his wife and children following them while towing their mobile home, with Ross telling them that David “invited” them to come to New York. 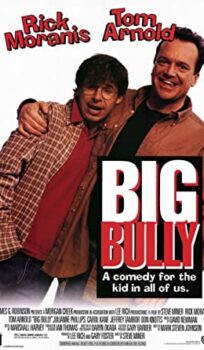