Margaret Keane (Amy Adams) has been producing the big-eyed, waif paintings for 10 years while her second husband, Walter, takes credit.  The waif paintings are a world-wide sensation and Walter decides that their piece de resistance will be introduced at the World’s Fair; however it is critically panned and ultimately never displayed.  In a rage Walter tries to burn down Margaret’s studio with her and her daughter inside. They escape unharmed and flee to Hawaii.

Walter finally finds them in Hawaii after Margaret files for legal separation but in order for Walter to grant her a divorce, he demands she paint 100 more waifs and send to him. She agrees and starts sending him the art, but with her signature on them.  Margaret also becomes a Jehovah’s Witness during this time and realizes she needs to tell the world the truth about the paintings. She announces on a local radio show that she is the true artist and sues Walter for slander and financial compensation.  During the trial Walter represents himself and seems to unravel right before the court’s eyes. The judge determines the only way to prove who is the real artist is for them each to paint a big-eyed waif within an hour with the court looking on.  Margaret immediately starts painting while Walter starts to panic and makes up an excuse that his shoulder is sore and he cannot paint.  The jury finds in favor of Margaret and upon leaving the courthouse, a fan asks for her autograph.

The movie ends by telling us the Walter spent the rest of his life saying he was the true artist of the waifs and died in 2000 penniless. Margaret eventually moved back to California from Hawaii and is still alive today and paints daily. 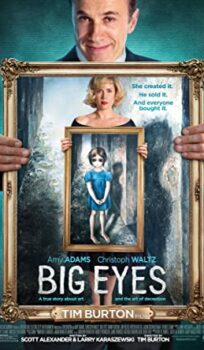