Bob/The Hunchback (Allan Katz) ends up proposing to Cathy (Melora Hardin) one day (unaware that his instructor, Diane [Cindy Williams], has developed feelings for him), but she tells him that, while he is a special guy, she only sees him as a friend. That night, the crestfallen Bob gets a call from Dr. Fisk (Jessica Harper), who tells him that Cathy has been badly hurt, and she was now in the girls’ dormitory and needed to see him. Very concerned, he hurries over there. However, Fisk – who stubbornly refuses to believe that Bob is anything but a wild man – had actually lied about that, knowing that Bob in his now-panicked state would cause chaos trying to look for her and come across as a maniac, which would serve as a good reason for Judge Ferguson (John Finnegan) to have him institutionalized. After seeing Bob heading for the dorm, she calls campus security on him.

Bob enters the girls’ dorm and does indeed cause a lot of mayhem searching for Cathy. He finds her and discovers that she is alright, but then, after looking at the chaos he has created and with campus security trying to apprehend him, he frightfully runs off into the night. Later, Dr. Webster (Tom Skerritt) reluctantly has campus security notify the police about Bob’s actions.

Bob spends the better part of a day hiding out on the streets, but when he attempts to raid a produce warehouse for food, he notices some employees watching According To Hoyle, a talk show that he was supposed to be a guest on to show how much he had developed. He sees Alex (Corey Parker), Cathy, Diane, Webster, Fisk, and Ferguson (who has the commitment papers signed and in his hand) on the show, and after the host Hoyle (Gerrit Graham) declares for dramatic effect that the first four are in big trouble, Bob believes that they truly are in danger, so he heads to the TV station.

While evading the security guards there, Bob enters the studio where Hoyle’s show is held through a skylight and walks across the lighting scaffold. As a guard closes in on him, he swings down from the scaffold on a cable and snags Fisk with his legs. He then makes her publicly admit that she lied to him and set him up, causing the audience to side with Bob and Ferguson to tear up the papers. Bob and Fisk get to the ground, and Diane knocks Fisk out and shares a passionate kiss with Bob. Hoyle apologizes to Bob for insulting him, and when he asks him what he will do now, Webster says that they will try to get him a scholarship at the college so he can continue his education there. Bob then gives Diane another big kiss to end the film. 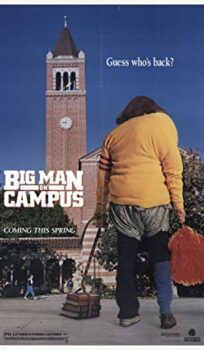