Bingo makes it to Green Bay, Wisconsin and finds out where Chuckie (Robert J. Steinmiller, Jr.) lives, but he sees Chuckie approaching his home with a collie on a leash. Drawing the conclusion that Chuckie has forgotten about him, he sadly walks away, but we find out that the collie really belongs to Chuckie’s elderly neighbor and he was just walking it for her. Bingo ends up getting taken in by Vic (Bill Meilen), the owner of a diner, and is made to earn his keep by licking the plates clean as an assistant dishwasher. Lenny (Kurt Fuller) and Eli (Joe Guzaldo), who had escaped from prison some time after Bingo did, start putting up “Lost Dog” posters of Bingo around town offering a cash reward and also providing their contact information, hoping that someone will find him and bring him to them so they can take revenge on him for getting them put behind bars in the first place. Chuckie finds one of these posters outside of his school and realizes that Bingo is in town somewhere.

Bingo’s co-worker Dave (Drum Garrett) – who is the head dishwasher and feels that Bingo is a threat to his job – gets a hold of a poster and visits Lenny and Eli and tells them that Bingo is at the diner. They soon drive off to get him, in the process informing Dave that the cash reward was a lie, and Chuckie shows up shortly afterward and learns about Bingo’s location from Dave. Lenny and Eli snag Bingo just after he finishes his shift, but Chuckie then shows up and orders them to let go of his dog. He then charges into them on his bicycle, giving Bingo the opportunity to run and hide, but he gets seized by the crooks and put into their car. As they drive off with Chuckie, he warns them that his father, Hal Devlin (David Rasche), will clobber them when he finds out that they snatched him, and Hal will have the entire offensive line of the Green Bay Packers to assist him. After Chuckie then blabs that the Packers are taking on the Detroit Lions tonight for a playoffs berth, Eli rapidly comes up with a plan to make some big money through betting on the game, which will enable him and Lenny to hire a whole crew of dogcatchers to find Bingo. All the while, none of them are aware that Bingo is riding on the car’s roof.

Lenny and Eli take Chuckie to an abandoned luggage factory and bind and gag him, and Bingo gets Chuckie’s attention from outside. After Eli steps out to use a phone to get a part of his plan started and Lenny is distracted with his part of the plan that involves creating a bomb strong enough to level the factory, Bingo sneaks inside and up to Chuckie, who tells him to go to his house and get help. Bingo heads over there and winds up trying to communicate three times to Chuckie’s mother Natalie (Cindy Williams) and his brother Chickie (David French) that he is in trouble, but he fails each time, even after bringing over articles of Chuckie’s clothing for them to recognize. During his final attempt, Eli calls the house and tells Natalie that he and Lenny have her son, and they will return him only if Hal misses all his field goals and they don’t get the police involved. After finding out from Chickie that Bingo appeared at their door again, she believes that Bingo has been acting as the kidnappers’ messenger and orders Chickie to go after him. She then calls Hal and lets him know about the kidnapping and the demands issued as well as her belief that Bingo is working for them, and she adds that she has sent Chickie to track him down. Meanwhile, Bingo returns to the warehouse and fights Lenny and Eli, but he gets captured and tied up as well. Thankfully, Chickie arrives outside during the fight, and after looking through a window and seeing the danger his brother is in, he runs home to tell Natalie.

Back at the warehouse, Lenny gets the bomb ready (and he synchronizes the timer with the game clock so the bomb – if it is active – will explode the second the game concludes), puts it in a suitcase, and sets it inside a big garbage bin, and Eli mindlessly throws his cigar butt into a pile of crumpled papers. As they are about to leave to collect their impending winnings on the football game, Sheriff Clay (Stephen E. Miller) shows up in the distance in his truck with Natalie and Chickie as passengers, so they hop into their car and lead the good guys on a chase. Meanwhile, the warehouse catches fire from the cigar butt, and Bingo manages to get free and tries to undo Chuckie’s ropes, but it proves to be too time-consuming of an effort. Chuckie tells him that he is going to have to pull the fire alarm, but Bingo sees that he has to jump over flames to get to it, and his pyrophobia overcomes him again. However, after Chuckie passes out from smoke inhalation, Bingo finds the courage to make the jump and pull the alarm, and firefighters quickly come to the place, rescue Chuckie and Bingo, and douse the flames.

Meanwhile, the car chase ends when Lenny and Eli find themselves surrounded by police vehicles, and after they step out, Lenny shows off the detonator while Eli warns Natalie, Chickie, and the cops that they will blow up Chuckie if Hal makes the final field goal. Being a die-hard Packers fan and having bet money on the game himself, Clay patches himself through to Hal and lies by saying that his son has been found and to go ahead and make the field goal, and then he informs the panicked Natalie that he has a plan. Back at the warehouse, Chuckie warns the firefighters that a bomb is in a suitcase in the trash bin, but one of the firefighters tips it over to show that there are a bunch of suitcases in there and asks Chuckie which one contains it. Bingo puts his paw on the correct one, so Chuckie yells for him to get rid of it. As this happens, Lenny and Eli get their attention drawn to Natalie fighting with Clay to keep him from shooting his rifle at them, so Eli tells Lenny to press the button. However, the rifle then goes off, and the bullet hits Lenny’s hand and sends the detonator into the air just as Hal scores the field goal and Bingo jumps into a nearby lake with the suitcase. The detonator lands on the ground button-first and blows the bomb, and Chuckie believes that Bingo is dead and faints from shock. One of the firefighters radios someone and tells them to tell Clay that Chuckie is fine but is being sent to the hospital to be treated for shock, and they are still looking for Bingo.

Chuckie awakens in the hospital to find his family standing near him, and Hal says that Bingo has been found. They take Chuckie to him, and in Bingo’s room stands the friends and even foes that he made during his travels, and Natalie informs Chuckie that they had all heard Bingo’s story on the news and wanted to wish him well. Chuckie sees that Bingo is okay and asks Hal if he can keep him, and after getting stared at by the others, Hal tells him that he can….just as soon as Bingo is neutered. Bingo looks at the camera and growls in discontent. 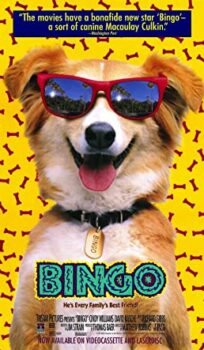