Birdman or (The Unexpected Virtue of Ignorance)(2014)

Pooper:
Riggan’s play is a massive success as he shoots himself onstage at the end. Riggan survives the gunshot and seemingly flies out his hospital window, once again on top of the world.

Long Ending:
Riggan Thomson (Michael Keaton) is a former star of a hugely successful super-hero franchise called “Birdman.” The fame of the series has ebbed and Riggan wants to be taken seriously as an actor. Accordingly, he wrote, directed, and is starring in a play based on the work of Raymond Carver, a famed writer who inspired Riggan to become an actor. Riggan hears and sees his “Birdman” persona throughout the film as a physical manifestation. The Birdman persona hates doing the play, saying Riggan should return to big-budget Hollywood. Riggan also appears to have telekinetic powers, although it is hinted that these powers are a figment of his imagination.

Riggan has hired his daughter Sam (Emma Stone) as his assistant in order to keep her out of trouble since she recently left rehab. He is co-financing the play with his best friend and attorney, Jake (Zach Galifianakis) and the play is bankrupting them. He dates one of the play’s female leads named Laura (Andrea Riseborough) and the other is played by a first-time lead named Lesley (Naomi Watts). Riggan hates the other male lead. At the last rehearsal before previews, a stage light falls and hits the other lead actor, causing severe injury and essentially knocking him out of the play. Riggan tells Jake that he used his telekinetic powers to cause the injury.

Lesley is able to convince her boyfriend and famed Broadway actor Mike Shriner (Edward Norton) to join the play. It is clear that Mike thinks Riggan is a fraud and a sell-out and has nothing but contempt for Riggan. Mike often re-writes scenes and forces the production to spend even more money. He even notes that Raymond Carver was probably drunk when he wrote Riggan a note encouraging him to pursue acting. Meanwhile, both Sam and Riggan’s ex-wife Sylvia (Amy Ryan), whom he still loves, chastises him for being a distant father/husband and egocentric. He admits as much, telling a story about a plane crash he was almost in and saying he was only sad that fellow passenger George Clooney’s death would have gotten more headlines.

Each of the previews go poorly, with Mike getting drunk and insulting the crowd on the first preview, Mike trying to actually have sex with Lesley on-stage during the second preview and acting with a big boner, and Riggan accidentally locking himself outside the theater in tightey-whiteys during the final preview performance and being recorded walking the streets of NYC in his underwear to get back in the theater through the front doors. Riggan is also upset when Mike breaks up with Lesley and begins dating Sam (although their relationship ultimately makes both of them far more stable and happy). Jake notes, however, that all of this drama has only served to generate intense interest in the play.

The night before the premiere, Riggan sees the top theater critic Tabitha Dickinson (Lindsay Duncan) in a bar. They converse, and Tabitha says she will be writing a negative review no matter what as she hates that Riggan is sullying the theater with his Hollywood star and echoes Mike’s earlier sentiments that he is a fraud. A negative review from Tabitha will essentially destroy any chances of success for the play. Riggan drinks until he passes out. When he awakens, he envisions himself as Birdman, noting he deserves to fly above the City like a god.

The night of the premiere arrives. At intermission, we see the audience raving about the performances and writing (Mike being far more invested now that he is with Sam). Laura tells Riggan she is not pregnant after all, and they commiserate over what may have been. Sylvia awaits Riggan in his dressing room and she genuinely compliments the play and his performance. He notes that the night he cheated on her (their anniversary night) and she kicked him out, he attempted to commit suicide. The two patch things up and share a kiss before Sylvia goes back to her seat for the second act. The finale of the play calls for Riggan’s character to shoot himself. Possessed by artistic fervor, Riggan takes a real gun and actually shoots himself in front of the audience. They look on stunned, and then all in the theater but Tabitha give a raucous standing ovation.

The film cuts to a hospital room where we learn that Riggan shot off his nose and a new nose has been affixed (his bandages resemble a Birdman mask). Sylvia and Jake are in the hospital room and Jake says that Tabitha ended up giving Riggan’s play the best review ever (entitled “The Unexpected Virtue of Ignorance,” which is the subtitle of the movie), especially applauding his shedding actual blood for his art. Jake says people are holding candlelight vigils for him and that he is back to megastar status. Sylvia is upset that Jake is encouraging Riggan’s reckless behavior, and the two leave the room when Sam comes in to visit. Sam brought Riggan his favorite flowers (something she failed to do throughout the film) and he notes he can no longer smell them. She goes to find a vase and while he is alone (except for his Birdman persona), Riggan goes to the window and smiles at some birds flying freely. He opens the window and leaps out. Sam returns to the room and is distraught to see her dad missing. She notices the open window and in a panic, runs over to it. She doesn’t see Riggan on the ledge or on the ground below. She then looks up into the sky… and smiles. 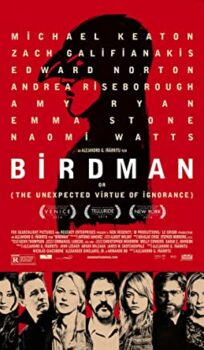