The land of Kahndaq is overrun by the mercenary group Intergang. Archaeologist Adrianna Tomaz (Sarah Shahi) finds the Crown of Sabbac, which Intergang pursues, and she awakens the alleged champion of Kahndaq, Teth-Adam (Dwayne Johnson). Knowing of Adam’s destructive history, the Justice Society of America (Doctor Fate, Hawkman, Cyclone, and Atom Smasher) heads out to bring Adam to Amanda Waller. Adam proves to be powerful and has no qualms about killing anybody that stands in his way, but he forms a bond with Adrianna and her son Amon.

Intergang’s leader Ishmael Gregor kidnaps Amon and forces Adam and the others to bring him the Crown. Although Adam kills Ishmael, he sees that his powers are out of control as they were when he killed the corrupt King Ahk-Ton, which led the Wizards to imprison him. Adam explains to Hawkman that his son Hurut was granted the powers of Shazam and was the true champion, but he gave his father his powers to save him after assassins killed Adam’s wife, and they killed Hurut as well, leading to Adam’s revenge. He willingly gives up his powers and surrenders.

Ishmael is resurrected as Sabbac and begins to terrorize Kahndaq. The Justice Society and the citizens fight back, with Fate summoning Adam to fight back before Sabbac kills him. The surviving Justice Society members help Adam as he uses his powers to tear Sabbac in two and save the city. He vows to be their antiheroic protector.

Waller contacts Adam and urges him to stay in line, or she will send others after him. When he challenges her, he is met by Superman. 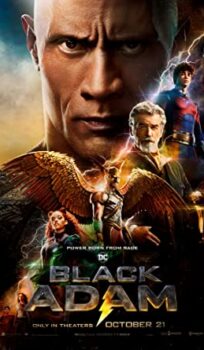