Rachel, a Jewish singer in occupied Holland, joins the Resistance after her family is killed. She is sent to seduce and gather information from SS Officer Müntze. Things take an unexpected twist however when Müntze quickly deduces who she is and does not turn her in and Rachel finds herself falling in love with him, even as she helps smuggle out information. Someone in the Resistance betrays her just as the Allies come to liberate the country, and now the victorious rebels think she was a traitor. She and Müntze escape and go on the run. Desperate to prove her innocence, she meets an old friend and gets a black book from him, a record of all the Jewish families they attempted to help smuggle away. He is killed seconds after, and when Müntze chases after the killer, he is attacked by the angry crowd and arrested as a war criminal. The British officer in charge allows the Germans to carry out the death sentence the Nazi government had placed on Müntze, allowing the defeated military to reprimand its own men as it sees fit. Rachel is put into a prison for Nazi sympathizers. She is rescued from the prison by Akkermans, the resistance member who had fallen in love with her, but when he sees the black book in her possession, he tries to kill her – she realizes that not only was he the traitor, but he was part of the plot to kill wealthy Jews as they escaped the country, her family included. She escapes and with the help of the Resistance leader, seals Akkermans is coffin, suffocating him.

The movie bookends with her, years later, living in Israel, married and teaching a classroom full of children. As the movie ends, we see cars squeal into the area where she lives and troops jump out as the sounds of gunfire erupt nearby. 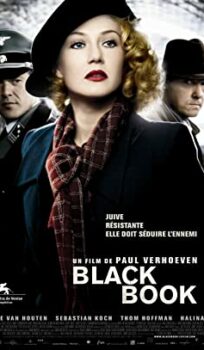