The Linscotts (a wealthy and extremely eccentric L.A. family) committed and conspired to cover up the murder of the Black Dahlia.

Emmet Linscott, father of the family, is real estate tycoon and also involved in movies on the side (some main-stream, some pornographic).  He and his friend George go way back.  George had an affair with Emmet’s wife Ramona and is the real father of Madelene Linscott (Hilary Swank).  When Madelene was young she bore a strong resemblance to George, so to help hide the family’s secret Emmet arranged to have George’s face disfigured in an “accident”.  Then he kept George close, giving him odd jobs such as the family gardener and helping behind the scenes producing his stag films.  At the time of the film Ramona Linscott is a heavily medicated, constantly drunk, and out of her mind.

Lee Blanchard (Aaron Eckhart) and Bucky Bleichart (Josh Hartnet) were two of the police officers working on the Black Dahlia case.  Lee was one step ahead of Bucky, traced the murder to the Linscott family, and was blackmailing them.  Out of revenge Madelene setup and murdered Lee with George’s help.  After Bucky figured out what she had done he followed her and a date to a seedy motel, snuck into her room, confronted and then shot her. 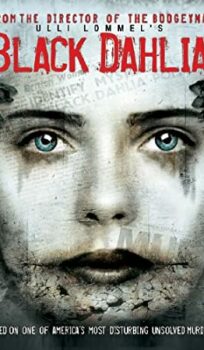