It turns out that Sato also stole one of a pair of engraving plates for counterfeiting $100 bills that belongs to Yakuza boss Sugai (Tomisaburo Wakaya) from one of the murder victims but got rid of it before he was arrested.

Nick and Charlie fly with Sato back to Osaka but Sato slips out of custody when some of his men impersonate police officers and take Sato off of the plane after it lands. Nick and Charlie are permitted to stay in Osaka, but their firearms are confiscated.

With the help of reluctant Japanese cop Masahiro (Ken Takakura), and expatriate brothel owner Joyce (Kate Capshaw), they try to pursue Sato. Sato and his motorcycle gang trap Charlie in an underground garage and Sato decapitates Charlie with a sword as Nick watches, helplessly.

Masahiro is dismissed from the police force in disgrace for helping the bull-headed Nick by giving him Charlie’s firearm as a token of remembrance and participating with Nick in a shootout at a steel mill with Sato and his men.

Nick is ordered back to the U.S., but he sneaks off of the return flight before it departs and enlists the aid of Sugai to set a trap for Sato. Nick realizes Sugai wants Sato out of the way and needs the other plate for the counterfeiting operation. Sugai speaks of the “black rain” that fell after the atomic bombs were dropped on Japan and believes that organized crime is just a way to get back at America.

When Sato meets Sugai and the other Yakuza bosses to exchange the plate for the title of Oyabun, Sato has his own plan to assassinate all of the bosses, so a major gunfight erupts. Nick, aided by Masahiro, manages to make sure everyone gets killed and after a motorcycle chase through some muddy fields, beats up Sato. When given the chance to impale Sato on a sharp fence post, he instead captures Sato and turns him in to the Osaka police.

Nick is given an award by the Osaka police and returns to the U.S., leaving Joyce in Japan. Masahiro is re-instated and Nick gives him the missing plate before he departs. 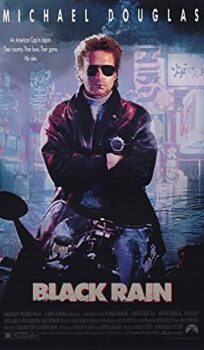