Former childhood friends Abby (Katie Aselton) and Lou (Lake Bell), who’s friendship has long since soured following one breaking up the marriage of the other, both arrive at some docks having been tricked by mutual mate Sarah (Kate Bosworth) into coming after she claims to have cancer. Neither are impressed by the ruse or the falsehoods concerning the bogus terminal illness claims by Sarah who wants them both to accompany her to isolated Black Rock island to dig up an old time capsule they buried in their youth.\

Once arriving, Lou and Abby continue to be at each others throats despite Sarah’s hopes of bringing them together to once again bond through this adventure. All this changes when they run into fellow former classmate (and younger brother of one of their familiar faces from childhood), Henry (Will Bouvier) an ex-soldier who has brought two of his former comrades in arms; Alex (Anslem Richardson) and Derek (Jay Paulson) on a trip.

The pair of trios come together on friendly terms, but when Abby, Lou and Sarah discover their new found friends are here illegally hunting, not fishing as claimed, things turn tense, particularly when Alex, Derek and Henry are discovered to have been dishonorably discharged from events in the middle east that sound suspiciously to be almost war crimes. Nevertheless, Henry convinces Abby to take a nighttime forest stroll with him. One thing leads to another, but their intimacy turns nasty when Abby rejects Henry, who in a jealous rage, starts raping her, during which she hits him with a nearby rock and escapes. Derek and Alex rush to his aid, but he dies in Alex’s arms. Derek, infuriated that Henry is dead, persuades Alex to help hunt the trio down.

The three females head for the shoreline to reach their boat, only to see their pursuers have set it adrift, and have taken up sniper positions with one of them shooting Sarah in the head as they run along the sand. Abby and Lou try to swim for Henry’s boat as they are fired upon, but start succumbing to the cold and currents and are forced to return to the island were they have to strip off and huddle together for warmth.

Derek has to tend to Alex who has fallen down a hill, breaking his leg.

The next morning, the women retrieve their partially dry clothes and head down to the beach, intending to escape the island, when they come across Alex lying in a tent with a makeshift splint on his leg, as Derek patrols the shoreline, As they attempt to steal a gun, Alex comes to and raises the alarm prompting Abby and Alex to struggle over the gun, which she snatches away after continuously striking his damaged leg. Despite him begging for mercy, she coldly blows him away. Abby and Lou team up to fight with Derek, leading to hand to hand combat. Both women are stabbed and battered with rocks and sharpened sticks, before they finally overpower him by stabbing him in the neck, and then using his own combat blade to slice open his throat.

The two women then leave on Henry’s boat with a slain Sarah also on-board, having left the three men to the island’s scavengers. 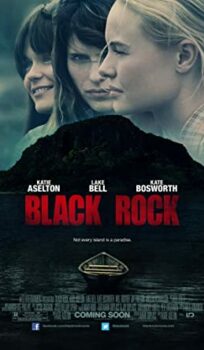