Pooper:
Asa fails to trick Dr. Gorobec into killing Katia and she is then caught and burned at the stake by the Priest and the townspeople. Asa’s death causes Katia to revive and she and Dr. Gorobec passionately embrace.

Long Ending:
Two centuries prior to the main story, the viewer witnesses the death of Princess Asa (Barbara Steele) at the hands of her brother. Asa, along with her servant Javuto (Arturo Dominici) are discovered to be satanic witches. Javuto is fitted with the mask of Satan and buried in an unhallowed graveyard alongside murderers and those who have committed suicide. Asa is branded with the mark of Satan and also fitted with the mask of Satan, this mask fitted with spikes on the inside that are hammered into Asa’s face. She is then killed, but not before vowing revenge against her family. This day of Asa’s death became known throughout the land as Black Sunday.

Centuries later, two doctors journey through the woods on their way to a medical conference. The horse-drawn cart breaks down and while it is being repaired Dr. Kruvajan and Dr. Gorobec (John Richardson) investigate some nearby ruins. The two find a dilapidated tomb where Asa was laid to rest. Dr. Kruvajan removes Satan’s mask from Asa’s corpse (to get a look at the skeletal face beneath) and after being attacked by a bat, accidentally destroys the cross attached to her coffin. He is wounded by the bat and some of his blood lands on Asa’s lips. The pair then encounter Princess Katia (also Barbara Steele), a descendant of Asa’ brother who looks exactly like Asa. Dr. Gorobec falls in love with Katia at first sight and asks to see her again as he and Dr. Kruvajan will spend the night at a nearby inn.

Katia lives in the musty family castle with her father, brother Prince Constantine and servant Ivan. Their father gets premonitions of Asa’s return and takes ill. The children send another servant to ride into town to retrieve the two coachmen. Meanwhile, Asa begins to regenerate and recites a spell to rejuvenate Javuto. She sends Javuto to kill Katia’s father, but Javuto is repelled by the father’s cross that he keeps at his bedside.

Javuto kills the coachman and dons his apparel. Javuto comes across Dr. Kruvajan and asks him to come to the castle to save Katia’s father. Instead, Javuto takes Dr. Kruvian to Asa’s tomb. She hypnotizes him and drains him of all blood, turning Dr. Kruvajan into an undead slave like Javuto. Dr. Kruvajan then goes to the castle, convinces Constantine to remove the cross from their father’s room and kills the father. Asa also explains that if she drinks Katia’s blood, she will become immortal. Later, Javuto also kills Ivan.

Dr. Gorobec journeys to the castle after hearing of the father’s death and to search for Dr. Kruvajan. That night, Dr. Kruvajan appears and warns Dr. Gorobec to flee the castle. Dr. Gorobec refuses to leave and after witnessing several strange events (and finding a secret passageway leading to Asa’s tomb and seeing her rejuvenated), talks to the local Priest. The pair soon determine that Asa has returned to life and that Dr. Kruvajan is her slave. They locate Dr. Kruvajan’s grave and stake him through the eye, which is the only way to kill Asa’s minions.

Dr. Gorobec races back to the castle as the priest gathers the townspeople. Upon arrival, Dr. Gorobec determines Asa has been kidnapped and taken to Asa’s tomb. He is attacked by Javuto and almost killed. He is saved by Constantine (who was attacked and badly beaten by Javuto earlier in the film), who helps him throw Javuto down a pit. Constantine begs Dr. Gorobec to save Katia before either fainting or dying (it is unclear which).

Asa managed to draw some of Katia’s energy from her (putting Katia in a catatonic state) and thus gains a youthful appearance. She is stopped from drinking Katia’s blood as Katia is wearing a cross on a necklace around her neck. When Dr. Gorobec arrives, Asa pretends to be Katia and tells Dr. Gorobec to stake Katia through the eye. Before he does, Dr. Gorobec realizes that the catatonic body is wearing a cross and deduces that Asa is trying to trick him into killing Katia. He tears at Asa’s clothes and reveals that she is still a skeleton beneath them. Asa tries to flee but is captured by the then-arriving townspeople and Priest. They tie Asa to a stake and burn her to death. This causes Katia’s energy to return to her body and she awakens. She and Dr. Gorobec share a loving embrace as the credits roll. 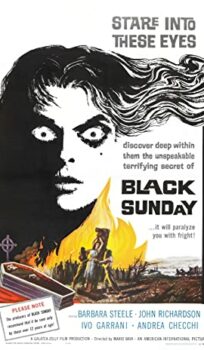