Steve Walker (Dean Jones) is coach of the awful track team at Godolphin College.  The local landmark, Blackbeard’s Inn, will be torn down if the old ladies who run it can not raise money to pay off the mortgage.  Lowlife gambler and bookie Silky will tear it down to build a casino.  The old ladies hold an auction to raise the money.  Steve buys a bedwarmer that belonged to Blackbeard’s wife.  That night, he breaks the bedwarmer, revealing a witch’s spell book.  Steve reads one of the spells, summoning the ghost of Blackbeard the Pirate (Peter Ustinov).  Blackbeard was cursed by his wife to remain in limbo until he does a good deed.  Blackbeard can touch and move things, but only Steve can see or hear him.

Blackbeard decides that if he saves the inn, and saves Steve’s job, that will be the good deed to free him from limbo.  Blackbeard takes all the money the old ladies have and bets it on the track team to win the big meet.  Steve’s strange behavior (talking with the invisible ghost) leads the dean to assign attractive young psychology professor Joanne Baker (Suzanne Pleshette) to monitor him.  Joanne is also the head of the committee to save the inn, and is furious with Steve because she thinks he stole the money of the old ladies.

At the track meet, the invisible Blackbeard trips opposing runners, throws Godolphin’s jumper over the bar, and makes sure Godolphin wins.  The ladies should have won enough money, but Silky refuses to pay on the bet.  Steve and Joanne go to Silky’s lair to confront him.  Silky tells his thugs to beat Steve.  With the help of the invisible Blackbeard, Steve thrashes them all, and gets the money for Joanne.  Joanne and Steve rush back to the inn, to pay off the mortgage before the stroke of midnight.  Blackbeard returns to the inn.  He becomes visible to everyone, so Joanne realizes Steve is not crazy.  His good deed done, Blackbeard disappears into the spirit world.  Steve and Joanne are clearly falling in love. 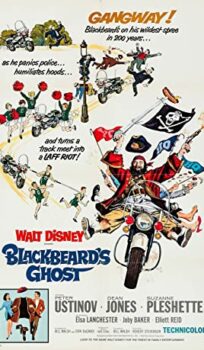