Based on a true story, Ron Stallworth ( John David Washington) becomes the first black police officer in Colorado Springs. His first major assignment is to sit in on a Black Panther meeting to see if they are planning to radicalize. There, he meets Patrice Dumas (Laura Harrier), head of the Black Student Union, and they later form a relationship. Ron listens to the words of speaker Stokely Carmichael/Kwame Ture, who wants to empower fellow black Americans, but also warning of an impending race war.

Ron sees an ad for the Ku Klux Klan and makes a phone call pretending to be a racist white man. He manages to set up a meeting with the chapter’s president, and with permission from the chief, he gets fellow detective Flip Zimmerman (Adam Driver) to pose as Ron when meeting face-to-face with the Klan. Flip gains trust from most of the Klansmen, but one of them, Felix Kendrickson (Jasper Pääkkönen), remains suspicious of Flip and believes he’s Jewish (he is).

The Klan’s Grand Wizard, David Duke (Topher Grace), arrives in town for a meeting, and Ron is assigned to protect him, despite knowing what would happen if he were to be around the Klan. Flip is officially initiated as a Klansman, while Felix and two of his cohorts, plus his wife, are planning to attack the BSU with a C4 bomb. After one of the Klansmen recognizes Flip as the cop who busted him, Felix tries to expose Flip in front of Duke, but it doesn’t work. Ron follows Felix’s wife Connie as she plans to kill Patrice with the bomb after placing it under her car. Ron tries to arrest Connie, but two white officers think he is attacking her, and they assault him until Flip shows up and tells them he and Ron are both cops. Felix pulls up with his buddies to detonate the bomb, not realizing they are sitting right next to the car with the bomb, and he blows himself and his friends up while Connie is arrested.

Ron later reveals himself on the phone to Duke after previously convincing him he was white. Despite Ron’s operation being successful, the chief orders him to destroy evidence of the investigation so the public won’t find out about it. Ron reluctantly does so. Patrice later breaks it off with him after he admits to her that he is a cop. They then see a cross being burned not far from Ron’s apartment.

The film ends with real footage of neo-nazis/white supremacists/Klansmen during the 2017 Charlottesville riots, as well as clips of Donald Trump and David Duke spreading their continued support of the Klan, and a video of the nazi that ran into a group of protesters and killed Heather Heyer, showing that groups like the Klan are still very much in power to this day. 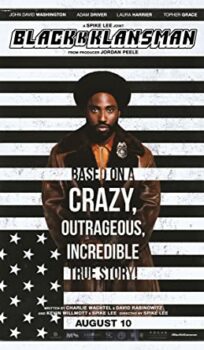