Bolivia, 1927. James Blackthorn (Sam Shepard) is actually famed outlaw Butch Cassidy, who survived the gunfight with the Bolivian army in 1908, though eventually having to mercy kill his best friend Sundance (Pádraic Delaney) due to the wounds he suffered during the fight. Old and weary, Blackthorn intends to leave Bolivia for the U.S. after learning that Etta, the woman he and Sundance bothloved, has died. He intends to spend time with his son, Ryan, who he has never met.

On his way out of the country, he encounters a man Eduardo (Eduardo Noriega) who claims to have stolen $50,000 from a corrupt mine owner Simon Patino, and offers to split it after losing Blackthorn’s horse and money. They recover the money, though have a constant wave of mercenaries after them, one of which kills Blackthorn’s lover Yana (Magaly Solier).

Blackthorn eventually learns from a former Pinkerton adversary Mackinley (Stephen Rea) that Eduardo didn’t steal from Patino, but rather the miners who now owned the mine. Blackthorn, who made a rule never to steal from “the people” and enraged Yana died over this lie, chases after Eduardo. Eduardo admits what Blackthorn heard is true, and is unrepentant. Blackthorn shoots him in the leg, leaves the money, and heads into the mountains so he can continue his escape in order to see his son. The remaining miners catch up to the wounded Eduardo and kill him, recovering the money that was rightfully theirs. 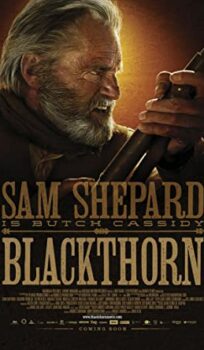