Chazz (Will Ferrell) and Jimmy (Jon Heder) make up, and begin their sci-fi themed routine. Fairchild, seeing the two doing extremely well, throws some of the pearls she wore in her routine onto the ice. Chazz injures his ankle on one, and so cannot perform the Iron Lotus, which requires that one partner throw the other into the air. Jimmy then offers to switch parts with him. Never having practiced the other part, Jimmy runs the risk of killing Chazz. But confident in their new friendship, the two decide to try to perform the Iron Lotus.

As the stadium watches in fascination and fear, Jimmy swings Chazz by the ankle, bouncing Chazz’s face close to the ice and then throwing him high into the air after several revolutions. As Chazz does a backflip above, Jimmy begins a “butterfly” move underneath. Jimmy’s free leg comes so close to Chazz as Chazz comes out of the backflip that Jimmy’s blade slices off some of Chazz’s neck stubble. The Iron Lotus is a success, and Jimmy and Chazz also win the competition, thus reclaiming their gold medals. Jimmy makes up with Katie, and Chazz shows Jimmy a tattoo that he had done which symbolizes that he will never again compete alone, for he has a new partner: Jimmy. Stranz is arrested for his shooting of the Mascot, and he fingers Fairchild as the mastermind of the plot. They are both taken into custody. Jimmy and Chazz receive their gold medals, and reveal rockets in their skates that propel them out of the stadium and into the sky, where they create a new constellation that is reminiscent of one of their first awkward moves, a crotch-grab, by shooting fire into the night sky. 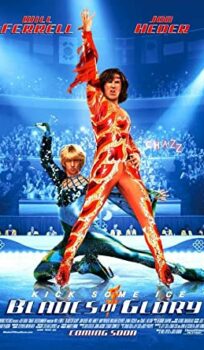