An unnamed city is struck by an unidentified virus which makes everyone go blind instantly. The government, not knowing what to do, quarantines the blind in a rundown hospital, among them are a doctor (Mark Ruffalo) and his wife (Julianne Moore); she’s the only one that can see, but she keeps it a secret from everyone.

Abandoned in a decaying hospital, people break out into groups. The self-proclaimed “King” of Ward 3 (Gael Garcia Bernal) uses a gun to impose his will on everyone else, monopolizing the food rations and only handing them out for money and valuables, and much later, sexual favors. When one woman is raped and beaten to death, the doctor’s wife stabs the King to death.

The hospital is then set on fire by another patient, and everyone escapes. The city is now abandoned, left in ruins. Everyone runs around desperately trying to find shelter and food. The doctor’s wife leads a small group of survivors: her husband, a prostitute, an old man, a little boy, a Japanese couple, and a dog, to their apartment, where they settle down and start to live as a family.

At the end of the film, the Japanese man (who was the first to be afflicted by the virus) suddenly regains his sight, and everyone is left with the hope that they, too, will eventually be able to see again. 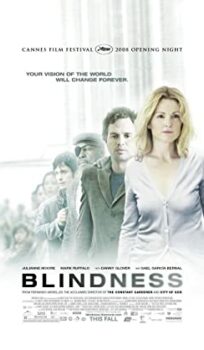