Captain Tom Wilder (John Wayne) has spent a long time in a communist Chinese prison.  He is starting to lose his mind, and talks to an imaginary friend “Baby”.  He is rescued from jail by people he does not know.  There is a village nearby, where they have a plan to escape from communist China.  They have a way to commandeer a ferry boat, but need a captain to pilot it to Hong Kong.  They are led by Cathy Grainger (Lauren Bacall), the daughter of the mission doctor.

Wilder is reluctant at first, but realizes he has no other option now.  He prepares the boat for the difficult voyage.  They survive storms, pursuit by enemy gunboats, and sabotage from opposition on the boat.  They reach Hong Kong. Cathy and Captain Wilder fall in love along the way.  Various characters, including John Wayne, deliver monologues about the evils of communism. 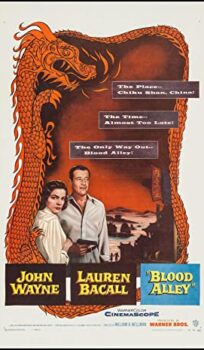