Frank (Jean Claude Van Damme) and Chong Li (Bolo Yeung) end up facing each other in the finals of the Kumite.

As Frank is gaining the upper hand, Chong Li takes a handful of quicklime out of his tights and throws it into Frank’s eyes, blinding him. However, Frank manages to overcome this handicap by remembering and utilizing the lessons his master taught him on how to fight using his other senses. He gets the better of Chong Li and makes him shout “matté” for the submission victory, winning the Kumite and becoming the first Westerner to do so. He also retrieves Ray’s (Donald Gibb) bandanna from Chong Li, which he had taken from Ray after he defeated and hospitalized him the day before.

Later on, Frank and Janice (Leah Ayres) visit Ray at the hospital to inform him of Frank’s victory, and Frank gives Ray his bandanna back. Touched, Ray tells Frank that if he ever needs his help, he’ll be there for him.

The next day, Frank boards a plane back to the U.S. with Helmer (Norman Burton) and Rawlins (Forest Whitaker) to face his army desertion charges, and before he goes, he and Janice bid each other farewell by exchanging bows. Before the credits roll, we see a short list of the real Frank Dux’s (alleged) achievements. 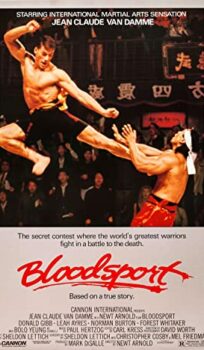