While saluting some enthusiastic people around him at the kitchen of the Ambassador Hotel after his memorable last speech, a solitary unknown shooter -whom Tim Fallon (Emilio Estevez) had bumped into, earlier- opens fire against Senator Robert F. Kennedy, mortally wounding him.  In the confussion, the homicidal gun also wounds campaign volunteers Jimmy (Brian Geraghty) and Cooper (Shia LaBeouf); Samantha (Helen Hunt); former staff member Timmons (Christian Slater); and Diane’s (Lindsay Lohan’s) husband, William (Elijah Wood).  Busboy José (Freddy Rodríguez) comes upon Senator Kennedy and holds his hand together with a crucifix, to comfort him.

The unfortunate incident unleashes a pandemonium, and people run hysterically about the hotel, as Kennedy is rushed out in an ambulance, towards the Good Samaritan Hospital.  Many of the main characters are seen distraught, and crying out of sadness and the impotence of watching their hopes and dreams shattered.  The movie lingers towards the end, with another speech of Senator Kennedy in voiceover.

Title cards inform that he died on the morning of June 6th., 1968, with his wife Ethel on his side, while the other victims of the shooting survived.  The credits start rolling, and we are shown pictures of RFK, family and relatives. 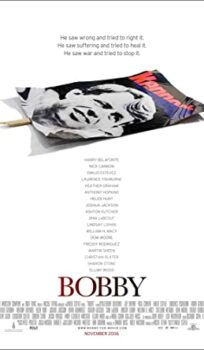