The group plays a game called Bodies Bodies Bodies which is supposed to be a murder mystery. The game goes sour when David argues with Emma and Greg. David is later found with his throat slit, and the girls believe there is a real killer among them. They initially suspect Greg after finding weapons in his luggage, but when they try to confront him, he attempts to defend himself, and Bee kills him by bashing his head with a weight. Emma is also later found dead after falling down the stairs, with the girls believing she was pushed. Jordan and Alice suspect Bee since she has not been entirely honest to Sophie about her background. More arguments happen, where it comes out that th girls all basically hated each other, particularly Jordan towards everyone. She gets out a gun and shoots Alice in the leg out of anger, and in a struggle for the gun, she shoots Alice through the head. While Sophie tries to get the gun from her, Bee throws Jordan over the bannister where she falls on broken glass bottles.

In the morning, Bee has come to completely distrust Sophie after Jordan had told her that they had hooked up before going to the party. Bee demands to see Sophie’s phone, but they fight for it and end up finding David’s phone. After unlocking it, they find that he slit his own throat by making a TikTok and trying to use a large knife to open a champagne bottle. Another member of the group who left the previous night, Max, shows up to witness the scene, while the electricity finally comes back. 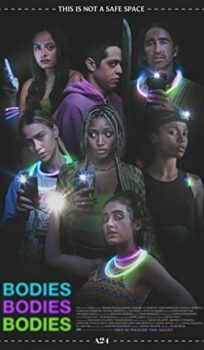