Roger Ailes (John Lithgow), is the chairman of Fox News and a sexual predator who harasses women for decades. Gretchen Carlson (Nicole Kidman), tired of it all, is fired and sues Roger for sexual harassment and wrongful termination, assuming that other women will come forward.. which they don’t, at first. At Fox, everyone is pressured to support Roger, especially star Megyn Kelly (Charlize Theron), but she knows the truth – Roger harassed her in her early days.

Megyn doesn’t want to come forward initially, burned by her public battle with Donald Trump, so she seeks out other women who it has happened to and urges them to come forward, including the once-idealistic Kayla (Margot Robbie), who chastises Megyn for not saying anything and stopping it from happening further. Kayla and many other women go to the investigators, and eventually Megyn comes forward as well.

Roger is fired from Fox, and Gretchen receives a twenty million dollar settlement. 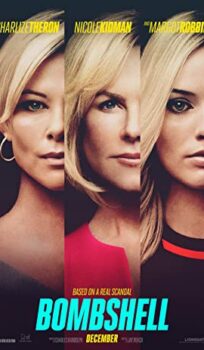