Big John (Clark Gable) and Square John (Spencer Tracy) are wildcat prospectors in Texas.  Square John has a girl back east that he is madly in love with, and writes too constantly.  The men are the best of friends, and they strike it big in oil together.  When the girl, Betty (Claudette Colbert), comes west, she falls in love with Big John and marries him instead.  However, Big John can not restrain his womanizing and running around.  Square John is furious at how Big John treats Betty.  The two men fight it out, and Big John leaves with Betty, while Square John keeps the oil wells.

Years later, Big John is a rich oil baron.  He still has a woman on the side (Hedy Lamarr).  The old friends have reunited.  However, Square John sees how unhappy Betty is in her marriage.  Square John tries everything he can to drive Big John back to Betty, including trying to marry Hedy Lamarr, and going into direct competition to damage Big John business (since Betty says they were happiest when they lived poor in Texas).  Finally, by pretending that Betty is ready to run off with him, he gets Big John to value the wife he has and go back to her.

Because of Big John’s actions to save his business, the federal government charges him under the Sherman Anti-Trust Act.  The trial is going badly.  Square John shows up as a surprise witness.  His testimony saves Big John.  The movie ends with the two friends going into business together again in the California oil fields. 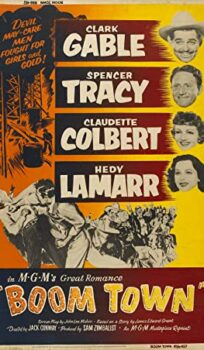