After Rushon (Tommy Davidson) and Bunz (Jamie Foxx) experience one bad situation after another during their attempts to procure protection so they can have sex with Nikki (Tamala Jones) and Lysterine (Vivica A. Fox), they decide that they have had enough of going through so much hassle just to get some action and tell the ladies that they are going home. As Nikki and Lysterine follow the guys out of their apartment building and onto the street, the guys complain about how they almost got shot during their quest (during a botched robbery at a convenience store they went to in order to buy plastic wrap to use as makeshift dental dams), surprising the ladies. Bunz starts to hail for a taxi, and after Lysterine decides to stand alongside him, Nikki talks to Rushon and apologizes for unintentionally risking his well-being before telling him that she wants to make it up to him. However, as they start to get affectionate with each other again, Bunz sees this, and without thinking, he tells Rushon that it looks like that he will be winning their bet over who will get laid before sunrise first. Rushon is then pressured by the ladies into admitting that he and Bunz had that bet going on between them, and insulted that they were about to be used like that, the ladies tell the guys to go screw themselves.

Bunz gets a taxicab to stop by stepping in front of it, but the paranoid driver – thinking that Bunz wants to steal his cab – comes out pointing a handgun at him and tries to shoot him. However, the gun jams, and before the driver runs away in terror, he throws the gun on the ground and causes it to go off, and the bullet ricochets off a streetlight and cuts Rushon’s right thigh. Bunz decides to take the taxi and drive Rushon to the hospital with it, with the ladies accompanying them. Along the way, Rushon tries to apologize to Nikki, but he suddenly gets silent after Bunz teases him by calling him “whipped”, which greatly annoys Nikki. After the quartet get to the hospital and Rushon is refused treatment by the admissions nurse because he doesn’t have proof of insurance, Bunz finds and puts on a scrub suit with a nametag saying “Dr. Zevroloski”, then goes up to the nurse and tells her that Rushon has been pre-admitted. He gets Rushon into a wheelchair and rolls him into one of the rooms to get treated, and after he leaves, a nurse gives Rushon a powerful painkiller and sends him to the surgical prep room. However, a patient lying next to him finds out from another patient that he is scheduled to be castrated, so he switches his patient clipboard with Rushon’s just as a surgeon arrives calling for him, and the surgeon soon wheels Rushon into the operating room.

Meanwhile, the real Dr. Zevroloski (Robert Bidaman) shows up in the admitting area yelling that his I.D. has been stolen while security is escorting him out, and just as the admissions nurse sees this and realizes that she has been tricked, Nikki and Lysterine take off to find Rushon and Bunz. The women find Bunz first, so Nikki tells Lysterine to pair up with him and find Rushon while she continues to look around alone. Bunz and Lysterine look around the halls until the latter spots the admissions nurse searching nearby, so she forces Bunz to hide with her in one of the patient rooms. They eventually decide to have sex on one of the beds in there, but he climaxes after less than ten seconds. Nikki then locates Rushon just as the head surgeon is about to cut into him, so she barges into the operating room and yells that Rushon has no insurance. The head surgeon stops what he is doing and angrily tells one of the other surgeons to send him down to the county hospital before storming out.

Rushon eventually gets his bullet wound stitched up, and as Nikki is rolling him down the hall in a wheelchair, she informs him that his private parts are still intact, but they are completely shaven. He begs her to not tell Bunz about this, once again worried about what Bunz might think and how he might embarrass him, and Nikki dresses him down over this, having had enough of seeing it throughout the night’s events. Bunz and Lysterine then appear, and Nikki tells Lysterine to come along with her now that Rushon has Bunz to look after him. Rushon asks Nikki what he has to do to prove that he doesn’t care about what Bunz thinks, and she replies that the proof lies in what he does, not what he says. As the women try to continue their departure, he gets their attention, then stands up and shows off his shaved genitals and takes Bunz’s subsequent teasing remarks with a smile. He then comes up to Nikki, tells her he loves her, and they kiss. They then leave together, with her giving clear signs that she is still in the mood to do the deed with him, and Bunz and Lysterine follow after them.

Rushon and Nikki have sex, and we see that Rushon managed to tie up her pesky dog Killa with leftover plastic wrap beforehand so he wouldn’t be able to bother him. Meanwhile, Bunz and Lysterine put on some S&M attire, and the movie ends with Lysterine whipping Bunz while he is tied to her bed. 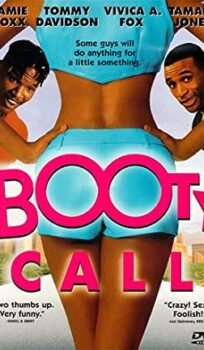