Pooper:
It’s revealed that the Kazakh government manipulated Borat into being patient zero of COVID-19 and sent around the world to spread the coronavirus in revenge for the world mocking Kazakhstan after the first film. After returning home, Borat and his daughter become esteemed reporters and lead a feminist and economic revolution in their home country.

Long Ending:
This film, like the first, incorporates fictional footage with footage shot with the unknowing involvement of real people.

The film opens with Borat Sagdiyev (Sacha Baron Cohen) in a labor internment camp as punishment for embarrassing his home country Kazakhstan in making the first film. However, the Kazakh government releases him to act as their emissary to the US. They hope that in Borat delivering a gift to US Vice President Michael Pence (himself), the US will add Kazakhstan to its list of allies. Borat is allowed to visit his home before he leaves, where he learns he is a pariah, his wife has remarried, and his sons have disowned him. Only his teenaged daughter Tutar (Maria Bakalova) seems to care for Borat. He is then placed on a ship that travels around the entire globe before arriving in the US.

Borat is supposed to deliver Kazakhstan’s biggest actor, a trained ape, to Pence. When he opens the ape’s crate, he finds Tutar inside. She wanted to visit America and stowed away in the crate (and ate the ape for sustenance on the journey). If Borat returns to Kazakhstan without securing an agreement with the US, he will be killed. He eventually decides to gift Tutar to Pence.

In an effort to make Tutar acceptable for Pence, they give her a makeover and enroll her in courses to improve her manners. The father and daughter also begin to bond. The pair attend an actual Pence rally where Borat unsuccessfully tries to deliver Tutar to Pence (but are escorted out by security). They then decide to pivot to giving Tutar as a guest to President Trump’s legal counsel Rudy Giuliani (himself). Knowing Giuliani’s affection for women with big breasts, Borat begins raising money to get breast implants for Tutar.

While Borat is working, Tutar learns that the Kazakh sexist folklore (such as their having teeth in their vaginas and an inability to drive cars) are untrue. She declines to get implants and instead decides to embark on a career as a reporter in the US. Tutar runs away from Borat when he objects. In his search for his daughter, Borat befriends Trump supporters and sings a racist/anti-Obama song at a conservative gathering. COVID-19 also spreads throughout the US, making it difficult for Borat to travel.

Some of Borat’s new friends find Tutar and tell her Borat will be killed if she doesn’t marry Giuliani. She decides she will offer herself to him and schedules an interview with Giuliani. Meanwhile, Borat reflects on his journey and realizes he truly loves his daughter. When he finds out Tutar is sacrificing her life for his benefit, he pursues her in hopes of stopping the marriage.

Tutar interviews Giuliani in a hotel room. She invites him to the hotel bedroom where Giuliani sticks his hands down his pants (Giuliani, not knowing he was being recorded for this film, claims he was readjusting his shirt). Before things progress, Borat bursts inside wearing only his underwear and offers to become Giuliani’s “gift.” Giuliani rushes out of the hotel room at this intrusion. Tutar and Borat embrace and declare their love for each other. They decide to return home to Kazakhstan.

When they arrive, Borat expects to be killed for his failure. To their surprise, the president simply applauds them on their efforts and lets them go. The pair realize that before they left, the government had injected Borat with COVID-19 and that he is unknowingly responsible for spreading it around the world (thus why the journey to the US was circuitous, also featuring a cameo from Tom Hanks (himself) meeting Borat on his journey). They realize that inflicting COVID-19 on the world was the Kazakh government’s true ploy to get revenge on the world for mocking it after the first movie was released. No longer jailed, Borat and Tutar embark on a very successful journalism career in Kazakhstan. Their success helps modernize the country and makes it less sexist, and indeed, make them more progressive than the backward Americans they met on their journey. 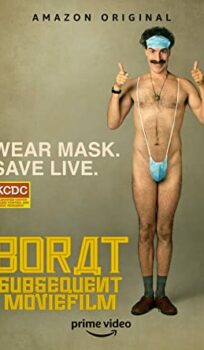