POOPER
Bjorn Borg defeats John McEnroe in 5 sets to win the Wimbledon Championship for a record 5th year in a row. One year later, McEnroe defeats Borg to prevent him from winning Wimbledon for a 6th year in a row. Borg retires from professional tennis later that year and McEnroe becomes the #1 player in the world.

LONG VERSION
In 1980, Swedish tennis star Bjorn Borg (Sverrir Gudnason) is the #1 men’s player in the world. He has won numerous championships, including the prestigious Wimbledon Championship the last 4 years in a row. However, the pressure of being the #1 player is starting to affect the quiet and introverted Borg. The constant demands from the media and his fans has him already thinking about life without tennis. The #2 player in the world is American John McEnroe (Shia LaBeouf), a rising star in professional tennis who has also won numerous championships, but has yet to win a Wimbledon Championship. Unlike Borg, McEnroe is loud and extroverted. He has quickly earned the nickname “Superbrat” due to his antics on the tennis court, which includes verbally abusing the match umpires. While most of the tennis world hates McEnroe because of those antics, his fans love him because of them. As the 1980 Wimbledon tournament approaches, Borg is the heavy favorite to win it for what would be a record 5th year in a row, but most believe that he will need to get through McEnroe to do so. This is confirmed when the tournament seedings are released, with Borg 1st and McEnroe 2nd, meaning they can only face each other in the final.

With both men in London in preparation for the tournament, the only thing the media want to talk to them about is each other, which irritates both of them. For Borg, seeing McEnroe brings back memories of his youth. As a young player, he was also temperamental on the court, and was even suspended for unsportsmanlike conduct for throwing his racket. But his talent caught the eye of Lennart Bergelin (Stellan Skarsgard), a former tennis star who is now Sweden’s Davis Cup captain. He recruits Borg to train in Stockholm, and he coaches Borg to play without emotion. Take out all his frustrations and rage on the ball, and he will never lose. This turns Borg into an elite tennis player, and he devotes his whole life to tennis. In 1974 he wins his first Grand Slam event, the French Open, becoming the youngest man to win that tournament. In 1976, he wins his first Wimbledon, and he is the youngest man to win that tournament as well. As his star rises, he becomes friends with the other pros and goes to clubs, including the famous Studio 54 in New York. He also has a huge following among female tennis fans. But he quickly realized that that life wasn’t for him, so he stopped going to clubs and hanging out with the other pros to concentrate solely on tennis. The lone exception is his girlfriend Mariana Simionescu (Tuva Novotny), a women’s tennis pro who caught Borg’s eye at a tournament a few years ago.

As for McEnroe, he sees Borg as someone he once was: a perfectionist. As a young player, McEnroe idolized Borg and wanted to play like him. His upbringing by his parents, but mostly his father, made him constantly strive for perfection, and anything that prevented that from happening ticked him off. He even sees a psychologist to learn to keep that from completely taking over his life. However, that behavior carried over to the court, and that’s what made him a tennis star. He also became friends with fellow pros and attends clubs, but unlike Borg, he still does so and it doesn’t affect his play.

The tournament begins and while McEnroe easily wins his early matches, Borg is struggling to win his. During a rain delay in one match, Borg wants to quit, but Lennart won’t let him. Afterward, Borg blames his poor play on Lennart for not preparing his rackets correctly and fires him. He later has an argument with Mariana and tells her to leave as well, but she stays. That night, after Borg has gone to bed, Lennart and Mariana talk about how Bjorn only wants to win, and when he starts losing, it’ll be the end of his career. Since tennis has been his whole life, what will he do without it? Meanwhile, McEnroe’s behavior is starting to grate at his friends. After he beats his best friend Peter Fleming in the quarterfinals, Fleming accuses him of stealing his ankle support before the match. McEnroe can’t bring himself to apologize, and Fleming tells him that he’s a great player, but he won’t be remembered as one of the best because no one likes him.

With both Borg and McEnroe reaching the semi-finals, the pressure is increasing for both men. Borg once again struggles in his match but wins, and afterward has a breakdown in the locker room. Realizing that he can’t continue on without his coach, Borg meets with Lennart and the two of them make up. McEnroe wins his match as well, but he’s not his usual self because his father surprised him by suddenly arriving in London before his match. During his semi-final, McEnroe blew up at the umpire, the crowd, and even his opponent Jimmy Connors. At the post-match press conference, the media only want to talk to him about his behavior instead of the match. Tired of the questions, McEnroe cusses out the reporters and storms out of the room.

The next day is the final, and both Bjorn Borg and John McEnroe are mentally preparing themselves for the match. As they take the court, the crowd enthusiastically cheers for Borg and lustily boos McEnroe. Once the match begins, McEnroe easily wins the first set 6-1, and the various TV commentators all agree that Borg looks overwhelmed and his quest for a 5th straight title is in jeopardy. That poor performance seems to wake up Borg, and he comes back to win the second set 7-5. The commentators now say that’s the Borg they’re used to seeing and that McEnroe now seems to be the one looking overwhelmed. This continues into the third set with Borg winning it 6-3. An increasingly frustrated McEnroe is doing his best to keep himself composed and, after a bad call by the umpire, surprises everyone by not throwing a tantrum. That composure keeps him in the match, and the fourth set goes to a tiebreaker. Despite facing seven match points in that set, McEnroe wins all seven and eventually takes the tiebreaker 18-16. By now, the same crowd that had earlier booed McEnroe is now cheering for him. Borg, disappointed that he let seven chances at winning get away, buries that feeling and gets himself ready for the next set.

In the fifth and final set, Borg and McEnroe each win 6 games again, with neither player able to break their opponent’s serve. Since there is no tiebreaker in the fifth set, they must keep going until someone wins by 2 games. Borg takes a 7-6 lead and, on his eighth match point, finally beats McEnroe’s serve and wins the set 8-6 to win his 5th Wimbledon Championship in a row. As an exhausted Borg accepts everyone’s congratulations, an equally exhausted McEnroe sits in his chair, covers his head with a towel, and starts crying. Following the match, Borg sees Mariana walk out of the awards dinner, and he follows her outside. She asks him if he should be inside. He says he just wants to go home right now with her, and they do. At the airport, Borg runs into McEnroe, and they are friendly with each other before they board their respective flights home. Title cards at the end of the movie reveal that John McEnroe beat Bjorn Borg in the 1981 Wimbledon Championship to prevent Borg from winning it for the 6th straight year. Later that year, Borg, after marrying Mariana, officially retired from professional tennis and McEnroe became the new #1 player in the world. The two became good friends, and Bjorn was even John’s best man at his wedding. 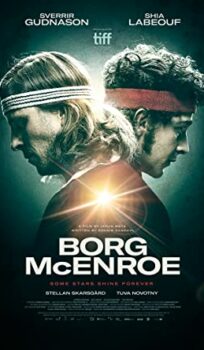