As Billie (Melanie Griffith) beefs up her intelligence with Paul’s (Don Johnson) help, she begins to question Harry’s (John Goodman) business practices and how he bullies her, his staff, and his political allies, then begins to seriously wonder why he makes her sign the papers she signs. One day, in hers and Harry’s hotel suite, she starts reading over the newest set of documents he wants her to put her signature on, and when he talks to her moments later, she defiantly tells him that he isn’t as big a man as he thinks he is and that he lives a cheap life and only cares about himself. He orders her to sign the papers, but she defies him again by saying that she wants to read them first, so he smacks her twice to force her into compliance and then tells her to leave and go back to Chicago. However, when his back is turned, she sets fire to the papers, then walks up to him and drops them near his feet. She tells him that he deserved that and he had better not lay a hand on her again, and adds that if things aren’t working out between them, then they aren’t, but he had better not make her hate him. She then leaves the suite and heads for the elevator with Harry following her, and after she gets in, she tells Harry to drop dead.

She then pays Paul a visit and tells him about the papers she has been signing and how she believes that Harry has done something illegal and fears she may have as well just by signing them. They go to the hotel, and after Billie finds out from the concierge that Harry is away, she and Paul head up to the suite and into Harry’s office area, where she knows Harry keeps a blue folder with the documents inside a brown case. They get the documents, and Paul soon gives them a thorough read and tells Billie that Harry has put all his companies in her name, which gives her control over him. He also finds copies of the checks Harry has been bribing senators with to keep open the military base that is situated near his Brock Village housing project (if the base were to close, the project would go teats up and he would be rendered bankrupt since he leveraged everything he had on it, which is the main reason why his companies are in Billie’s name: So they can’t be used to settle debts). He tells Billie that he is going to get this information out to the press, but Billie replies that she can’t let him do that. When we next see them, Paul tells Billie that he is going to take the documents down to the newspaper he works for and then he will come back for her, but she tells him that she will probably never see him again, for she has decided to go away for a while and maybe see her father. Paul then suggests that they get married, and he admits that he loves her, after which they kiss.

Meanwhile, Harry – accompanied by his associates Ed (Edward Herrmann) and J.J. (Max Perlich) – goes and purchases an engagement ring, having decided to marry Billie out of guilt over what he did to her. He comes back to the hotel room while Paul and Billie are in the middle of their kiss, so Billie quickly sneaks Paul out through a back door. She asks for the papers, but Paul replies that he can’t give them to her, and with Harry drawing closer to them, she has no choice but to shut the door. Harry soon proposes to Billie, but she rejects it without hesitation and informs him that she is leaving him, saying she has a different kind of life in mind. She tells Harry that Paul really mixed her up with all the things he had been teaching her, but when Harry hit her, all those things suddenly went into alignment and made sense. She says that she isn’t taking any more of his crap, for all she has been doing in their relationship is give and he has given nothing back until now, so she will not become his wife now or ever. Harry capitulates, but scornfully tells her that she will see just how well she can get along without him.

Harry then goes up to Ed and informs him that Billie has broken up with him, so they must transfer the ownership of his companies back to him. As they discover that the blue folder is missing, Billie gets their attention and tells them that Paul took it so he could give it to the newspaper. Suddenly, Paul appears, and Harry demands that he return his papers or else he will be sorry, and Billie soon tells Harry that she knows that he has been bribing senators. Harry tells Paul that he is ready to offer him a huge bribe to keep his shady dealings under wraps, but Paul replies that there are some things more important than money, like doing the right thing, and then he shows only to Billie that he has the documents in his inside coat pocket.

Paul extends his hand to Billie and asks her to come along with him, and the sight of this causes Harry to lose control of himself and attempt to choke Paul. Billie, Ed, and J.J. pry Harry off him, and Billie tells Harry that she is going to marry Paul and then kisses him passionately. Harry then suggests to Paul that he get Billie in return for him forgetting all about his wrongdoings, but Paul refuses this, too. Harry then yells that he can go ahead and screw up his Brock Village project because he has plenty of other businesses, but Billie reminds him that she owns said businesses. She then lays down the deal: She will give him back his companies at the rate of one per year, and he must take back the money that he gave to the senators and then get out of Washington D.C., or else Paul will write his story about his unscrupulous practices. She then suggests to Harry that, once he finishes doing his part, he should get to checking out some of the things in life that Paul showed her, and then maybe he will find a little bit of what she found and maybe find the happiness she found as well. She then pleasantly bids farewell to Ed and J.J. before departing with Paul. 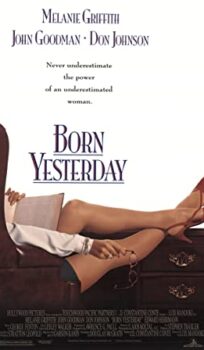