Under Devery’s advice Brock has been signing ownership of his properties over to Billie to hide his assets from the government.

When former showgirl Billie proves unpresentable for Washington society due to her ignorance and lack of manners, Brock hires idealistic journalist Paul Verrell (William Holden) to tutor her.  Billie quickly proves to be much smarter than everyone believed, and with Verrell’s encouragement begans thinking for herself.  She and Verrell fall in love.

Billie realizes that Brock is a corrupt crook and becomes determined to stop him from having legislation passed that will allow him to form a cartel.  She and Verrell steal evidence of Brock’s bribery and corruption schemes and confront Brock.  Billie promises to return ownership of Brock’s properties to him over time if he will leave her and Verrell alone. 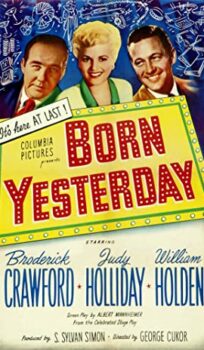