First part (1992): (imdb)
Despite the efforts of Detective Noseworthy (Brian Dooley) to have Brother Lavin (Henry Czerny), as well as some other Brothers, indicted on charges of sexual and physical abuse against some of the children of St. Vincent’s orphanage, based on sworn testimonies provided by several of the young ones, specially Kevin Reevey (Johnny Morina), the investigation is forcefully put into obscurity, for the sake of a million dollar grant promised to the institution.

The last scene shows the publicity upon the grant, with some Brothers and law representatives happily posing for cameras, while the children holding the symbolic check look frowned and anguished, due to their harrowing, ongoing situation.

* * * *
Second part (aka 15 years later) (1993): (imdb)
During the course of the trial against the perpetrators of the horrendous acts against the Boys of St. Vincent’s orphanage, 15 years ago, adult Steven Lunney (David Hewlett), who was revealed in court as a delinquent, drug-addicted, male prostitute, and also a molester himself, is found on the street, dead of a drug overdose.  This makes Kevin Reevey (Sebastian Spence), now an adult also, find the courage to testify against Brother Lavin, and so he does.

With the statements obtained by the High Comission put together to collect evidence, plus Reeve’s court testimony, there was already enough to bring Lavin down for his atrocities.  His wife, Chantal (Lise Roy), distraught over the appalling past of his husband, confronts him and asks him whether he had ever touched (unappropriately) his own boys or not; he answers that she should ask HER boys herself.  She answers:  “You’re right.  They’re MY boys.  They’re no longer YOUR boys!”, and walks away.  He is left, furiously banging his fist against a table, out of anger and remorse.  The screen goes black and the movie ends; we are left to infer that Lavin and the other child molesters were found guilty and sentenced to prison terms. 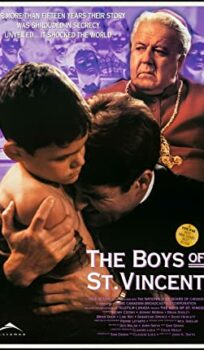