Mobster Larkin (John Vernon) and his lawyer Fields (Mel Ferrer) had staged the kidnapping. Larkin allowed his finger to be cut off, but considered that a small price to pay for the money he’d be collecting.  When Fields delivers the ransom money, he kills the “kidnappers.” and thinks he and Larkin have gotten away scot-free.

To their horror, they find that Brannigan (John Wayne) had planted a transmitter in the briefcase containing the ransom money, and had followed Fields to the ransom delivery site. Brannigan and Inspector Swann (Richard Attenborough) burst in and arrest both men.

After the British police take Larkin and Fields away, Gorman (Daniel Pilon), the assassin Larkin had hired to kill Brannigan, drives up in his sports car and tries to run Brannigan over. Brannigan shoots Gorman through the windshield, and Gorman’s car crashes into the Thames. 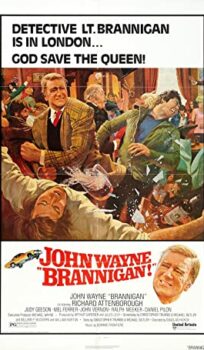