Submitted by Ellen and Herbmeistr

Pooper: (From Herbmeistr):
Merida sews the tapestry where she tore it, and rushes out to the standing stones to return her mother Elinor to normal. The bear Mordu attacks Merida, but Elinor protects her daughter and crushes Mordu under one of the stones. Mordu’s spirit (that of the human tyrant) nods to Merida and becomes a Will o’ the Wisp.

As the sun rises, Elinor returns to normal, as do the boys. Merida and Elinor make peace and begin a new relationship as mother and daughter.

Long Version: (From Ellen)
Elinor arranges for the heads of the 3 other clans to come to the castle and for the clan princes to compete for Merida’s hand in marriage. Merida is furious when she finds out, and she defeats all the princes in an archery contest. In anger, she rips a tapestry depicting their family and rides away into the woods. There, she meets a witch who agrees to put a spell on Elinor so that Merida’s fate will be changed. The potion is put into a cake which Merida gives to Elinor; the queen becomes ill and turns into a bear. They spend much time sneaking the queen out of the castle without the bear being killed. The remainder of the cake is eaten by Merida’s three mischievous little brothers, and they turn into cubs.

Merida and Elinor return to the witch’s hut but she is gone. A message has been left for Merida: that if she mends what has been torn by pride, before sunrise of the second day, the spell will be broken.

Elinor has to eat like a bear and finally manages it with Merida’s help. They grow closer and Merida sees how selfish she has been.

They spend much time sneaking back in to the castle to get to the tapestry and repair it. Elinor is becoming more bear and less queen, so when Fergus finally sees the bear with Merida, he attacks the bear despite Merida’s protests. As Elinor escapes the castle, all the visiting clans join in the hunt and Fergus locks Merida in her room for safety.

The cubs help Merida get out, and they follow the hunters, who have captured Elinor. Merida fights the men pulling the ropes on her neck as well as her father, explaining that this is her mother. Just then the huge black bear bursts in and the hunters turn to attack him (he had been a clan prince who once asked the witch for the strength of ten men) and the men are no match for the bear. It tries to attack Merida, who has been shooting it with arrows, but Elinor is able to keep the bigger bear away from her. They fight viciously, but Elinor slams the bear into a rock formation several times, seeing that it is unstable, and the rock eventually falls onto the bear, killing it and releasing the grateful spirit of the clan prince under the spell. Merida spreads the tapestry over her mother just before the sun rises, and the spell is broken. Her little brothers also return to their human forms.

Merida has movingly convinced the clan leaders that all young people should be able to choose for themselves whom they will marry, and she is free to wait for someone to win her heart. Elinor and Merida enjoy their new deeper relationship, and the three young brothers return to their mischief. 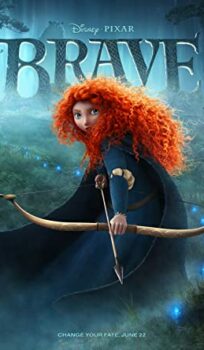