SHORT VERSION:
The Speedy Singhs make it to the Hyundai Cup finals against the Hammerheads, and before the game, Rajveer manages to get special helmets made for him and his team that won’t force his teammates to take off their turbans, after having been inspired by a battle helmet worn by a Sikh warrior in a portrait he saw.

The game ends with a tie score of 2-2, forcing an overtime period, and before it begins, Rajveer’s father Darvesh – who strongly disapproved of him pursuing a hockey career but had been listening to the majority of this game over a radio – shows up in the stands to let him know that he is supporting him now. Less than a minute later, Rajveer scores the deciding goal to give the Singhs the victory and the Hyundai Cup.

Darvesh comes down to the ice and tells Rajveer that he is happy he followed his dream and he is proud of him, and then Rajveer kisses his love interest Melissa while his teammates do victory circles around them.

LONG VERSION:
Things turn bad in Rajveer’s (Vinay Virmani) life when he and some of the other Speedy Singhs spend a few hours in a holding tank after having a drunken fight with the Hammerheads at a nightclub during Sonu’s (Russell Peters) and Reena’s (Noureen DeWulf) stag parties (due to Rajveer thinking that one of them was harassing Melissa [Camilla Belle]). Rajveer has a heated argument with his father Darvesh (Anupam Kher) over that and over him eschewing his trucking job for his hockey ambitions, so Rajveer kicks himself out of their home. Before a semi-final game in the Hyundai Cup Tournament the next day, Coach Dan (Rob Lowe) rebukes the team over the nightclub brawl, and in private, Rajveer tells him that it was all his fault, so Dan strips him of his rank as Captain. His ego now hurt, Rajveer quits the team, and he tells Dan that they won’t win without him. He encounters Melissa soon after, who scolds him for quitting and for his behavior at the nightclub.

After walking around and thinking for several hours, he stops by Dan and Melissa’s house. Dan won’t talk to him, but he apologizes to Melissa for how he acted. Melissa informs him that the Singhs won without him, but now the Hammerheads – whom they should be facing in the finals now – have filed a complaint with the league’s officials saying that the Singhs shouldn’t be allowed to play without helmets, threatening their forfeiture of the game since there is no way that they will take off their turbans for helmets.

Rajveer then heads down to the set of a Bollywood film being shot in the local Sikh temple that is starring Akshay Kumar (himself), since he wants to get his autograph for Darvesh. As he watches him do a scene before getting it, he spots a portrait on the set showing a Sikh warrior dressed for battle and looks at the helmet he’s wearing. This inspires him to get a similar helmet made for his teammates so they can play and keep their turbans on. He tells Melissa about his plan the next day, and how he will pay for these helmets with the money he saved from his job.

A week later, Rajveer and Melissa come before Dan and the Singhs, and Rajveer first apologizes to the team before presenting them with the helmets. Melissa also tells them that she got these approved by the league after telling the officials that, by trying to make the Singhs remove their turbans, they were trying to force them to abandon their right to practice their religion, which is a human rights violation. Dan invites Rajveer back onto the team and later restores him as Captain. The day after, Rajveer attends Sonu’s and Reena’s wedding and makes amends with Darvesh. After the ceremony concludes, Sonu tells the guests that their reception will be at the Hyundai Cup game. Rajveer tells Darvesh that it would mean a lot to him if he came, but Darvesh refuses. After Rajveer leaves him, Dan comes up to him and tells him that his son is a good hockey player and he must watch him sometime.

After three periods, the Singhs and Hammerheads are tied at two apiece, sending the game into overtime. Before it starts, Darvesh – who had been listening to most of the game on a radio – suddenly appears in the stands, and after making eye contact with Rajveer, he lets him know that he supports him now. Less than a minute into the period, Rajveer scores the deciding goal to give the Singhs the victory and the Hyundai Cup.

As the Singhs celebrate, Darvesh comes down to the ice and tells Rajveer that he has proved him wrong, and that he is glad he followed his dream and he is proud of him. The rest of Rajveer’s family and Melissa then come down to celebrate, and after Rajveer gets a photo with his family, he kisses Melissa while his teammates do victory circles around them. 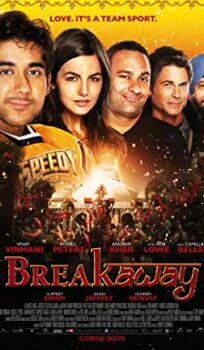