Pooper:
Billy decides to relinquish guardianship of Scot, allowing him to live permanently with Eric and Sam.

Long Ending:
Eric McNally (Tom Cavanaugh) was an arrogant star hockey player for the Toronto Maple Leafs who relished getting in fights before suffering a career-ending injury. Eric’s new career as a sports anchor is starting to take off with his getting a big assignment from his boss. Eric’s only confidante is his assistant, Nula (Jeananne Goosen). Other than with Nula, Eric keeps his personal life secret and rarely goes out in public. Eric lives with his husband Sam (Ben Shenkman) but is not open about his sexual orientation.

Sam and Eric are called by an attorney who explains that a single mother died from drug overdose and appointed Sam’s brother Billy the guardian of her son Scot (Noah Bennett). Billy stands to collect a large insurance policy upon becoming Scot’s guardian. However, Billy (who is very irresponsible) lives in Brazil and can’t take custody of Scot for at least a few months. Thus Sam, and begrudgingly Eric, agree to let Scot live with them until Billy can come to Canada.

Things get off to a rocky start as Scot is flamboyantly gay, wearing makeup and gaudy clothing to school. He also has no interest in sports and tells everyone about Eric and Sam’s relationship. Scot also clearly suffers from depression over the loss of his mother. Eric and Sam are overwhelmed, and Eric is particularly unhappy about Scot’s openness about their home life. The men try to get Scot to be less flamboyant so that he isn’t picked on in school – taking away his makeup and buying him more traditionally masculine clothing.

They soon learn that Scot has impressive figure skating skills and Scot asks to join a youth hockey team (Graham Greene cameos as the hockey coach). This gets Eric to return to the rink for the first time as Scot’s assistant coach and the two begin bonding. However, Eric’s reticence to be openly gay and preaching of traditional masculinity causes Scot to abandon his friends and become a bully. This culminates at the first hockey game where Scot beats up one of his own teammates and nerdy former friends out of frustration that his former friend got one of the other bullies kicked off the team for stealing his skates. Soon after, Eric and Sam learn that Billy will be coming back to Canada soon to take custody of Scot.

When Billy arrives, he surprises everyone by returning with a fiancée. Scot grows unhappy, feeling that Billy doesn’t care about him and that Sam and Eric are abandoning him. Eric becomes distracted at work by his home situation. He finally publicly comes out as gay and leaves an important work meeting to return home and plan a big party for Scot. At the party, Eric and Sam invite all of Scot’s friends (where he is able to reconcile with the nerdy friend he beat up) and Eric and also returns Scot’s makeup and clothing. During the party, Scot says he doesn’t want to go with Billy and Eric declares his love for the boy and desire that he and Sam keep him. Billy relents and Scot embraces his two dads. During the credits, we see that the trio are living happily (and that Billy has since found religious enlightenment). 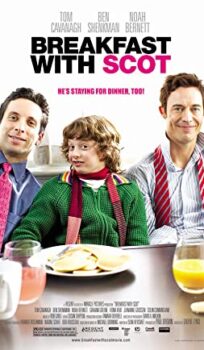