POOPER:
Monty uses the last $20,000 to hire Angela on retainer, which fulfills the terms of the will. Monty inherits the $300 million and begins a relationship with Angela.

LONG VERSION:
Montgomery “Monty” Brewster (Richard Pryor) is minor league pitcher who, along with his best friend Spike (John Candy), has just been released by his team after getting into a bar fight. A representative of a law firm bails them out and takes them to New York, where Monty is met by a pair of lawyers who run the firm. They tell Monty that he had a rich uncle who just died, and he left a film for him. That film shows Uncle Rupert (Hume Cronyn) telling Monty that he has left him his entire fortune, but there are several strings attached.

Monty can either take $1 million and walk away, or accept a challenge. The challenge is to spend $30 million in 30 days with nothing to show for it, and he will inherit $300 million. One of the conditions is that he cannot tell anyone why he is doing it. If he violates any of the conditions of the will, he will forfeit all of the money and it will go to the law firm. Monty accepts the challenge, and the firm assigns one of their paralegals, Angela (Lonette McKee) to keep receipts of all of his purchases. She cannot be told anything about the challenge either. Meanwhile, the heads of the law firm approach one of their junior lawyers with an offer. Warren (Stephen Collins) is promised full partnership if he makes sure that Monty doesn’t spend all of the money. Warren, who is also Angela’s fiancee, accepts the offer.

Throughout the movie, Monty hires several people for various odd jobs and pays them handsomely in cash, and uses his money to rent an expensive hotel suite and has it renovated. He also uses the money on bad investments and heavily bets on long shots. Spike, realizing that his friend is blowing all of his money, takes some of it and wisely invests it. Since any money made with the inheritance is considered an asset and a violation of the will’s terms, Monty has to spend that as well. He decides to use his money to bankroll an exhibition game between his former team and the New York Yankees (with him and Spike playing), and later to finance a mayoral candidacy where he encourages the voters to select, “None of the above.”

On day 29, everything seems to fall apart for Monty. His team loses the exhibition game, and he decides to retire as a baseball player. He then learns that if he wins the election, his mayoral salary would be considered an asset, so he withdraws from the race. With his last $38,000, he throws one last party, and hardly anybody shows up. With no money left, Angela leaves Monty, even though Monty has developed feelings for her. On day 30, the hotel kicks out Monty, and all of the clothes and furniture he bought has been repossessed. As he goes to the law firm, we learn that None of the Above won the election.

At the law firm, Warren goes to Monty and gives him $20,000 that was thought to be spent, and tells him he’s not broke. With only a few minutes left until midnight, and knowing there’s no way he can spend it in time, Monty prepares to sign over the money to the firm. With Angela looking on in confusion, Warren tells her everything. Monty had to spend all of the money and not tell anyone why, but thanks to him, the law firm will get to keep the money and he will now be a partner. A furious Angela quickly tells Monty not to sign anything and tells him what Warren did. Monty then punches Warren, who threatens to sue him. Monty then gives the $20,000 to Angela as a retainer for legal services. With the will’s executor looking on, Angela writes up a receipt and hands it to him as the clock strikes midnight. The executor declares the terms of the will fulfilled and orders the law firm to give Monty the $300 million. The movie ends with Angela breaking up with Warren and she and Monty walking out of the law firm together arm in arm. 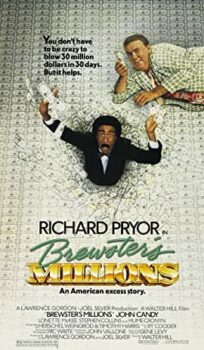