In the fall of 1965, the Chicago Bears sign running backs Gale Sayers (Billy Dee Williams) and Brian Piccolo (James Caan). It’s obvious that Gale will be a star in the NFL, but Brian has to try hard to make the team. Head Coach/Owner George Halas (Jack Warden) decides the best thing for both of them is to make them roommates. The decision is controversial, since no other NFL team has blacks and whites as roommates, and Gale is black while Brian is white. The two players quickly strike up a friendship, as do their wives. Both of them make the team as halfbacks, with Gale as the starter and Brian as his back-up. The season concludes with Gale Sayers winning the Rookie of the Year award.

During the following season, Gale suffers a career-threatening knee injury, which allows Brian to become the starter. Brian takes it upon himself to be Gale’s rehab coach. Brian doesn’t want the fans to think he’s the starter only because Gale is hurt; he wants to have earned the job from a healthy Gale Sayers. Gale eventually recovers, and returns for the next season. Before the season, Coach Halas tells Gale and Brian that they will both be starters, with Brian moving from halfback to fullback. However, Brian starts to have health problems. He’s losing weight, slowing down, and having trouble breathing. This eventually leads to Brian being benched and a trip to the doctor. Brian thinks he has asthma, but the diagnosis is much worse: he has cancer.

Brian has surgery to remove the tumor and part of his lung, which ends his season and puts his career in jeopardy. All of his teammates visit Brian in the hospital, but only Gale and his wife Linda continue to visit afterwards. Brian tells his wife Joy that he still wants to play, but the doctors discover the tumor is bigger than they thought and he needs additional surgery. After the second surgery, Brian’s health takes a turn for the worse and Gale goes to visit him at this bedside. The two teammates and friends, in a very emotional scene, say their good-byes.

Brian Piccolo later dies of cancer at the age of 26. 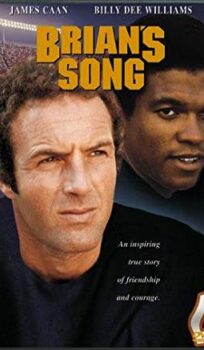