Damien (Paul Walker) and Lino (David Belle) make to the rocket where Tremaine Alexander (RZA) has strapped the neutron bomb. When they get the code to disarm it, Lino gets suspicious as the disarm code is the zip code to Brick Mansions. This makes him believe it will actually set the bomb off. Damien refuses to believe that he would be sent in to die and tries to punch the code in, only to be fought off by Lino. Tremaine and Lino force Damien to wait and to his shock, the bomb disarms itself harmlessly.

Tremaine reveals to Damien that he didn’t murder his father; his fellow officers executed him during a fake raid in Brick Mansions and placed the blame on him (using him as a martyr to push the Brick Mansions idea to fruition). Damien realizes that the Mayor had used him just like his father.

Damien, Lino, Tremaine and other residents storm the mayor’s officer and force him to admit that he sent the bomb into Brick Mansions to get rid of it (and indirectly reveals that he had Damien’s father killed). Damien tapes the conversation which leads to the mayor’s arrest.

We learn that public support has risen for Brick Mansions, with the interim mayor promising to tear the walls down. Lino reconciles with his girlfriend Lola, while Tremaine looks to leave his criminal past behind and run for mayor. Damien and Lino part as friends. Damien goes home and reunites with his grandfather, finally at peace with his past. 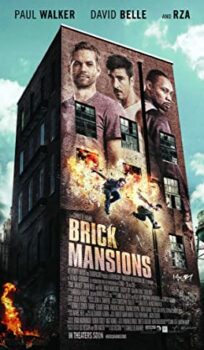