Liv (Kate Hudson) and Emma (Anne Hathaway) are best friends from childhood. When they are eight, their mothers take them to the Plaza for a high tea and they see a wedding and decide they will grow up and have their own weddings there. Twenty years later Liv, a hard-nosed lawyer, and Emma, a soft-hearted schoolteacher, are still best friends who do everything together.

Liv finds a hidden tiffany box in her closet and realizes her boyfriend is going to propose. She immediately announces her engagement to all of her friends and asks Emma to be her maid of honor but days go by and the boyfriend doesn’t propose. Meanwhile Emma’s boyfriend does propose unexpectedly. Emma is thrilled and immediately contacts a famous wedding planner (Candace Bergen) much to Liv’s chagrin. Liv barges into her boyfriend’s office and tells him she’s found the ring and he finally proposes. The women visit the wedding planner together and each chooses two of three available June slots at the Plaza. But a few days later there is a mix-up and Liv and Emma’s weddings are booked on the same day. The bride with the 3rd slot refuses to change her wedding so the women decide neither will make any plans until one of them moves their date – each implying the other one should make that sacrifice. Emma’s fiancé mistakenly reports to Emma that Liv has been ordering save the date invitations prompting Emma to send out a save the date email to all her friends. War is declared at the women’s bachelorette party!

They each spend the next few months sabotaging each other’s events until they reach their wedding day and are full of regret. However one last act of Liv ruins Emma’s ceremony and she rushes out and attacks Liv as she walks down the aisle. They fight until both realize how stupid it all is and make up. Emma’s fiancé tells her that Liv is a bad influence on her and they can’t be friends anymore. Emma realizes that he wants her to be the girl he met in school ten years earlier and they break up at the altar. Liv gets married with Emma in attendance. At the reception Emma dances with Liv’s brother who has secretly had a crush on her.

One year later the girls meet up for lunch and Emma is just back from her honeymoon with Liv’s brother and both girls announce their pregnancy with both babies due March 3rd. 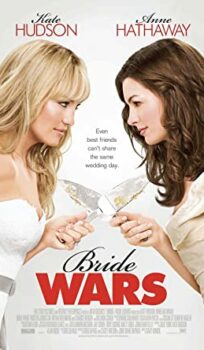