Short Ending:
After losing her position as maid of honor at Lillian’s wedding and ruining the bridal shower, Annie makes up with Lillian and regains her bridesmaid’s status. After a successful wedding, Annie befriends her bridesmaid nemesis Helen and drives off into the night with her new boyfriend, Rhodes.

Longer Ending:
Annie’s (Kristen Wiig’s) life is in a rut – her baking business has gone under, she is living with two terrible roomates, and her sex buddy is a jerk. She is then asked by Lillian (Maya Rudolph) to be her maid of honor. She meets the other bridesmaids, including the ultra-wealthy Helen (Rose Byrne) who clearly wants to be the maid of honor despite knowing Lillian for a short amount of time. Annie also befriends police officer Rhodes (Chris O’Dowd).

After several disastrous outings planned by Annie, the last of which leads to the bridal party kicked off the plane on their way to Las Vegas for the bachelorette party, Lillian demotes Annie from maid of honor status and replaces her with Helen. Annie also decides to have a one-night-stand with officer Rhodes, who she then walks out on after he encourages her to start baking again. Annie is then evicted from her apartment and has to move back home and is fired from her job. She attends the ultra-extravagant bridal shower created by Helen – who had stolen Annie’s idea to make the shower French-themed. After Helen gives Lillian a gift trip to Paris, Annie has a meltdown, destroys the bridal shower, and is essentially disinvited from the wedding. On her way home, Annie gets into a car accident and when officer Rhodes shows up at the scene, they get into a relationship-ending argument.

Annie is eventually cheered up by fellow bridesmaid (and the groom’s sister) Megan (Melissa McCarthy). She tries to make up with officer Rhodes but is rebuffed. The day of the wedding, Helen arrives on Annie’s doorstep saying that she can’t find Lillian anywhere. Annie convinces officer Rhodes to help her find Lillian, and the two women end up putting their problems aside and Annie attends the wedding as the brides maid. Helen steps aside, although she gives Lillian one more extravagent present, a live performance by Lillian’s favorite band Wilson Phillips. Helen and Annie make up and seemingly become friends. As Annie leaves the wedding, she finds officer Rhodes waiting for her. The two kiss passionately, before driving off together into the night.

After the credits, we discover that Megan has taped over the wedding video with her own homemade sex video with her new boyfriend, who she had met on the plane on the way to Las Vegas. 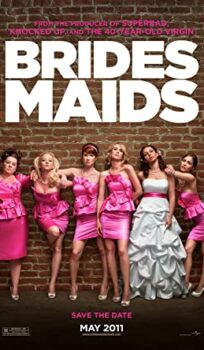