Italian-American housewife Francesca Johnson (Meryl Streep) had an intense four-day-long affair with photographer Robert Kincaid (Clint Eastwood), while her husband Richard (Jim Haney) and her two children, Caroline and Michael were away.  But after those four days, she came to the intersection of either staying for her family or run off with her found love.

Eventually, her family returns.  Shortly after that, Francesca spots Robert at a local store while her husband is shopping, and, while driving, Robert pulls over in front of Richard’s truck under the traffic light -and a heavy rainfall-, to wait for Francesca to come and escape with him.  She feels tempted to do so; however, her conscience doesn’t allow her to do it, and Robert drives off for good.  She decides to stay with her family, but always thinking of Robert; time passes, and Richard falls sick and dies, thereby leaving Francesca to live alone at the farm.

One day, she receives a package from Robert’s lawyer, which contains his camera, a bracelet and a book of published photographies called FOUR DAYS TO REMEMBER, a clear souvenir of that idillic occasion.

The diary Caroline (Annie Corley) and Michael (Victor Slezak) had been reading throughout the movie was a flashback narrative of their mother’s affair; although deeply resented from discovering that their mother had had an affair, they eventually come to understand the emotional ordeal Francesca was living and how this romance helped her to go on with her life, and decide to deal with their own personal situations.  Michael decides to ammend his situation with his wife Betty (Phyllis Lyons), while Caroline gives an old love a second chance.

In the end, at Francesca’s request, her ashes (she had died, of course; hence, the development of the plot) are spread to the wind while standing over one of the bridges of Madison County. 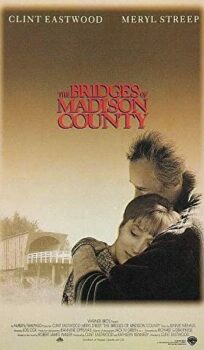