POOPER
Jeff accidentally shoots Harry, stopping him from leaving Brigadoon, which would have ended the miracle and doomed the villagers. Tommy wants to stay and marry Fiona, but a drunken and distraught Jeff talks him out of it and they return to New York. Months later, Tommy misses Fiona, so he breaks up with his fiancee and he and Jeff return to Scotland, even though they know Brigadoon won’t be there. As they are about to leave the area, the village suddenly re-emerges, and Tommy is able to enter the village and he and Fiona are reunited.

LONG VERSION
Two American tourists from New York, Tommy Albright (Gene Kelly) and Jeff Douglas (Van Johnson), are on a hunting trip in the Scottish Highlands. They come across a town that doesn’t appear on any map, and cross a bridge to enter it. The villagers are surprised by the outsiders in strange clothing, but one of them, Charlie Dalrymple (Jimmy Thompson) welcomes them and soon the rest of the villagers warm up to them. Charlie is in a good mood because today is his wedding day, and the two Americans soon meet his bride, Jean Campbell (Virginia Bosler). They also meet Jean’s older sister Fiona (Cyd Charisse), and Tommy immediately falls for her. Fiona also has feelings for Tommy, and soon they are singing and dancing across the Highlands.

Now back at the Campbell home, Tommy and Jeff see the family bible that Charlie has just signed as the newest member of the family, but they are shocked to see the date he wrote was 1747! The girls’ father Andrew Campbell (Albert Sharpe) tells them that the village received a miracle that allowed them to stay hidden from the world, but they should seek out the village schoolmaster since he can explain it better. They track down the schoolmaster, Mr. Lundie (Barry Jones), and he tells them what happened. The Highlands were filled with witches and others who would do the villagers harm, so the local pastor prayed to God for a miracle to save the town from those who would harm it. The prayer was answered, and he returned to the village to tell everyone what will happen. The village of Brigadoon will disappear at sundown, and reappear for only one day every 100 years (today just happened to be that day). So to Fiona and the rest of the villagers, only two days have passed since the miracle began, but to outsiders like Tommy and Jeff, 200 years have passed. Since the pastor believed that a sacrifice would be needed to allow for the miracle, he chose to leave Brigadoon, and his inability to return to his beloved hometown would be the needed sacrifice.

Tommy asks what if someone wants to stay in Brigadoon, and Mr. Lundie tells him he or she may stay if that person finds someone in the village to love and is okay with the fact that everything they have in the outside world would have to be left behind. While Tommy is mulling over that, Charlie and Jean’s wedding begins. Since the town doesn’t have a pastor, Mr. Lundie will perform the ceremony. Jeff, who has made it clear that he’s not a fan of love or marriage, skips the wedding to go hunting. During the reception, another villager, Harry Beaton (Hugh Laing), crashes the party and informs everyone that since he can no longer be with Jean, the love of his life, no one else can either and he’s leaving Brigadoon. He then runs off, and the villagers chase after him. Tommy learns that if a villager leaves Brigadoon, the miracle will end and the village would disappear forever, which would doom the fate of everyone living there.

The entire village is chasing Harry through the Highlands, along with Tommy. Harry reaches the bridge that Tommy and Jeff crossed earlier, which is the edge of Brigadoon, but everyone catches up to him before he can cross. Harry climbs a nearby tree to wait for the villagers to pass, but at that moment Jeff arrives. He sees a bird flying in front of the tree and shoots his rifle at it. He misses the bird, but hits Harry, who falls out of the tree and is killed instantly. While the villagers are relieved that Harry didn’t cross the bridge, the were saddened that he had to die to prevent it from happening. Meanwhile, a distraught Jeff heads back to the village to drown his sorrows. By now, Tommy has decided to stay in Brigadoon and will marry Fiona. She is thrilled to hear this and goes to get Mr. Lundie to perform another wedding. Tommy then finds a now-drunken Jeff to tell him the news, but Jeff asks Tommy if he’s really willing to give up everything for a woman he just met that day. Jeff also reminds Tommy that he already has a fiancee back in New York, or did her forget about her already? Fiona then shows up with Mr. Lundie, but Tommy tells her that he can’t marry her and he and Jeff must return home. Fiona is heartbroken but understands and says goodbye. As Tommy and Jeff are crossing the bridge, the sun begins to set, and they turn around and see Brigadoon disappear in front of them.

Four months later, Tommy and Jeff are back in New York and both of them are miserable. Tommy still misses Fiona, but knows that he can never see her again. Jeff also misses Brigadoon, but he cannot return because he would have to answer for killing Harry, plus he doesn’t want to fall in love with anyone there. Tommy has been ducking his fiancee Jane Ashton (Elaine Stewart), but he finally agrees to meet her at a restaurant. But every time she says something, it just reminds Tommy of something Fiona sang. Unable to take it anymore, Tommy calls off the engagement to Jane. He then calls Jeff and tells him he has to return to Scotland. Jeff reminds him that Brigadoon will not be there, but Tommy insists on going. Now back in Scotland, the duo return to the bridge, but as expected, the village is not there. But just as Tommy finally comes to the realization that Fiona is gone forever and they prepare to leave, the village suddenly begins to reappear. Mr. Lundie then appears at the other side of the bridge, and tells Tommy that he must really love Fiona in order for them to be woken up early. Tommy then says goodbye to Jeff and crosses the bridge. As Jeff walks away from Brigadoon for the final time, the movie ends with Fiona rushing up to Tommy and they kiss. 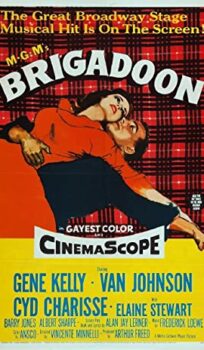