The film is set in a timeline where humans live among creatures such as orcs, elves, and fairies. Nick Jakoby (Joel Edgerton) is the first orc cop, and it has made him unpopular among both humans and his fellow orcs. His partner, Daryl Ward (Will Smith), resents him after an incident where Ward was shot by an orc thug, and Jakoby failed to catch the shooter.

Ward and Jakoby find an elf girl named Tikka (Lucy Fry), who stole a magic wand from her sister, the dark elf Leilah (Noomi Rapace). Leilah wants the wand to resurrect the Dark Lord, while others around the city want it for their own gain. Ward is forced to kill four corrupt cops when they want the wand for themselves and threaten to kill him and Jakoby to get it. They also face off gangsters, both human and orc.

Ward and Jakoby battle the dark elves, and Ward is able to wield the wand, as he is a Bright (people capable of magic), and he uses it to destroy Leilah.

The officers must cover up what happened, and they are commemorated for their heroism, alongside all the fallen officers. 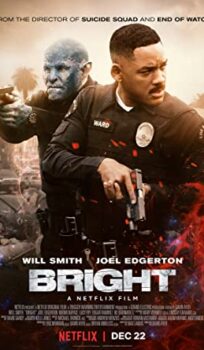