Pooper:
Brandon survives every attempt to defeat him and kills both his parents. The film ends with Brandon remorselessly causing destruction throughout Brightburn.

Long Ending:
A couple – Kyle (David Denman) and Tori (Elizabeth Banks) Breyer – are trying to conceive a child. They live in a rural area called Brightburn. One night, they see something fly from outer space and crash onto their property. Inside is a human-looking baby, and the couple decide to raise him as their own. They name the child Brandon and hide his spaceship away beneath their barn.

Jumping ahead, Brandon (Jackson A. Dunn) is now 12-years old and lives happily with his parents. He is incredibly smart, although is bullied at school. As his birthday approaches, the spaceship activates and begins transmitting messages to Brandon. He starts talking in his sleep and displaying a more aggressive attitude. He also obsessively draws a “double B” symbol (for Brandon Breyer) in a secret notebook. One day while mowing the lawn, he accidentally throws the mower 20 feet away. The transmission from the ship convinces him to stick his hand into the still-running mower… and the blades shatter.

Brandon soon learns he can fly, disrupt electronics, has super strength and speed, is seemingly invulnerable, and can shoot lasers out of his eyes (his intelligence may be another superpower too). He uses his powers to sneak into a female classmate’s room upon whom he has a crush (which scares the crap out of her). He eventually finds his spaceship, and his parents reveal his origin. Although angry at first, he comes to accept his parents’ claims that he is special (although he takes “special” to mean “superior”).

Now in control of his powers, Brandon becomes withdrawn and prone to outbursts. He again visits his female classmate, who says her mom wants him to stay away. That night, Brandon (wearing a mask and cape) attacks the diner the mom owns and abducts her. When the classmate publicly rejects him, he breaks her hand. Brandon then slaughters his family’s chickens, threatens his aunt (Meredith Hagner – who is his school counselor) after she says she needs to report his lack of remorse to the police. And he kills his uncle (Matt Jones) after the uncle catches him stalking his aunt and tries to tell his parents. At each scene, Brandon leaves the “double B” mark.

Brandon becomes more withdrawn and even uses his super strength to throw his dad against the wall during an argument. While Tori adamantly defends Brandon, Kyle sorrowfully becomes convinced that his son is evil. He tells Tori he is taking Brandon hunting to try and reconnect. Instead, Kyle tearfully shoots his son in the back of the head. The bullet bounces off and Brandon angrily kills Kyle.

Meanwhile, Tori goes through Brandon’s room and finds his private notebook. Therein is the “double B” symbol that has been present at all the sites of mayhem as well as illustrations of his murders and assaults of his victims. The final page has the words “Take the World” (which is the message his spaceship was transmitting to him) and a picture of him in his costume standing above a mountain of corpses. She tries calling Kyle, but Brandon answers and deduces that she knows his secret. Brandon begins attacking the house as Tori calls the cops.

The police are easily dispatched by Brandon while Tori runs to the barn. Earlier, Tori saw Brandon cut himself on the metal of his spaceship, which was the only time Brandon was ever injured. She grabs a shard from the spaceship and then approaches Brandon, claiming she still loves and believes in him. As they embrace, she tries to stab him. But he sees her attempt, easily stops her, and then kills her. Brandon flies into the air and destroys a passenger plane so that the police will think the deaths and destruction were caused by a plane crash.

The film ends with a YouTuber (cameo by Michael Rooker) screaming that aliens are here over viral footage of a masked and costumed figure (Brandon) causing destruction throughout Brightburn (including destroying his school). He also mentions other super-powered menaces (suggesting warped versions of Wonder Woman and Aquaman exist too). 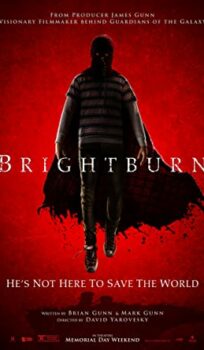