Bring Me the Head of Alfredo Garcia(1974)

POOPER:
Bennie brings Alfredo’s head to El Jefe and collects the reward, then kills him and his henchmen.  As Bennie tries to escape with the money and the head, he is killed by the guards at the front gate.

LONG VERSION:
A powerful Mexican leader (“El Jefe”) puts up a one million dollar reward for the head of Alfredo Garcia, because he impregnanted his daughter.  Two months later, two of El Jefe’s henchmen from Mexico City go into a cantina looking for him.  They find the bartender Bennie (Warren Oates), who says he’s heard of him but doesn’t know where he is.  Bennie goes to his prostitute girlfriend Elita (Isela Vega), who had earlier cheated on Bennie with Garcia, and tells him that he was killed in a drunk driving accident a week ago.  Realizing that he can get easy money by bringing back the head of an already dead man, Bennie makes a deal with the two henchmen.  They will give him $10,000 for physical proof that Garcia is dead.  Since Elita knows where he is buried, Bennie takes her with to the cemetery.

Along the way, Bennie proposes to Elita, saying they can use the money to start a new life together, and she accepts.  En route, they are accosted by two bikers (one played by Kris Kristofferson), who plan on raping Elita.  Bennie is able to get the gun away from one of the bikers and kills both of them.  Back on the road, Bennie, who still has the gun, tells Elita that the plan is to dig up Garcia’s grave and take his head, which horrifies her.  She asks Bennie to turn around and go home, because she just wants the two of them to get married and they don’t need the money to be happy.  Bennie refuses, but agrees to marry her the first chance they get.  They get to the cemetery, and as they open the coffin, they are knocked out.  When Bennie wakes up, he finds Elita dead and Garcia’s head missing.

Two bounty hunters, who found out that Bennie knew the location of Garcia’s grave, were following him and took the head for themselves so they can get the reward.  Bennie, still distraught over the death of Elita, tracks them down and kills them both.  Now with the head, Bennie begins to lose his mind and starts talking to Garcia’s head as though he was alive.  This happens throughout the rest of the movie.  Later, the family of Alfredo Garcia finds Bennie and makes him hand over the head so he can be properly laid to rest.  The two henchmen who Bennie made the deal with was following him as well, and they pull up and kill the family members and get the head back.  When Bennie realizes that the henchmen plan on killing him and take the head for themselves to collect the reward, Bennie kills the henchmen and takes back the head.

Now back in Mexico City, Bennie goes to the leader of El Jefe’s henchmen.  When they refuse to answer his question why they wanted Garcia’s head, Bennie tells them that he is no longer motivated by the money.  He blames Elita’s death on the reward and plans to kill everyone involved.  Bennie then kills all of the henchmen in the room and finds where El Jefe is living.  Bennie arrives at his compound on the day of the newborn baby’s baptism.  Bennie finds El Jefe, who is thrilled that someone brought him Garcia’s head and happily pays Bennie the one million dollar reward.  Bennie tells El Jefe that many people died because of this head, including his fiancee.  El Jefe doesn’t care, and he tells Bennie to just feed the head to his pigs.  Bennie then guns down everyone in the room, except El Jefe.  When he sees El Jefe’s daughter and the newborn, she tells Bennie to kill her father.  He then realizes that’s why El Jefe wanted Garcia’s head, and he kills him.  Bennie then takes the money and the head and runs out.  As Bennie tries to escape the compound, the guards at the gate open fire.  The movie ends with Bennie shot to death just yards from escaping. 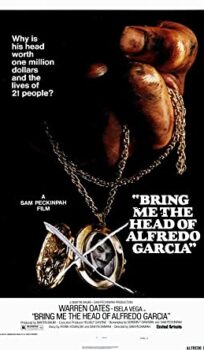