Matt Devereaux (Spencer Tracy) owns a huge cattle ranch in Texas.  He went west with his wife and 3 sons, and when she died remarried an Indian and has one younger son. Matt is a mean tyrant, who treats his sons poorly and works them hard.  The older 3 sons hate Matt, the Indian wife and their youngest brother.  Only youngest son Joe (Robert Wagner) loves Matt.

Matt’s cattle are dying because the river is being poisoned by waste from a copper mine upstream.  Matt and the boys go upstream and destroy the copper mine. The mining company goes to court.  Joe takes the blame and goes to prison for 3 years, to save Matt from prison. While Joe is in jail, the older brothers wrest control of the ranch from Matt. They drive Matt to his death by selling off land that he struggled so hard to acquire. They refuse a deal that would have let Joe out of prison early. Joe’s mother is sent back to live with her tribe.

When Joe gets out of prison, his brothers offer him a large amount of money to leave Texas and never return. He refuses and wants revenge for his parents. Joe goes back to the abandoned house they grew up in.  One of the indian ranch workers sees Joe, and brings his mother back to see him.. She convinces him revenge is bad, and that he should go with his ladyfriend to start a new life free of hatred.  He agrees, but when he is riding back to town oldest brother Ben (Richard Widmark) pops up behind him with a shotgun.  Joe tells Ben he has sworn off revenge and is leaving. Ben does not believe him, and Ben says that he will never feel safe while Joe is alive. Ben takes Joe out to a remote canyon, where Ben plans to kill him.

In a switchback on the trail, Joe gets the jump on Ben and knocks him down. Joe is escaping with Ben shooting at him. The old indian ranch hand had been following and shoots Ben. 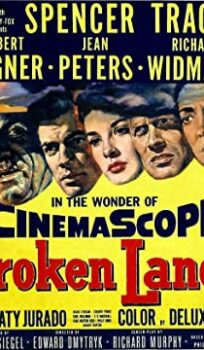